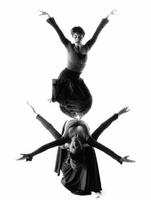 Ballet Jörgen Canada is a Toronto company dedicated to presenting new Canadian choreography. The troupe was founded in Toronto in 1987 by the young dancer and emerging choreographer Bengt Jörgen with administrative support from his wife, Susan Bodie. It began as a vehicle for the presentation of Jörgen's work and that of other emerging Canadian ballet choreographers who wished to work with a young group of dancers dedicated to contemporary choreography.

The mandate of Ballet Jörgen Canada continues to be the discovery, encouragement and development of new choreographers, particularly in the field of ballet. To this end the company concentrates on new and innovative creations, which it presents in Toronto and on tour. It also offers national workshops periodically to allow talented and motivated choreographers, both novice and experienced, to try out new ideas in a non-judgemental environment under the mentorship of senior artists.

Arnold Spohr, artistic director emeritus of the Royal Winnipeg Ballet, joined Ballet Jörgen in 1993 as its associate director. Spohr endorsed the company's emphasis on new works still linked to the tradition of classical ballet. Mary Jago-Romeril, a former principal dancer with the National Ballet of Canada, joined the company as its artistic associate in the fall of 1998 to complement the current artistic dream.

Ballet Jörgen has toured extensively in Canada and the United States and has programmed a mixture of ballets to represent the latest aesthetic trends as well as popular classical works. The company made its New York debut in February 1995, where The New York Times described it as "a rare and exhilarating find." That same year, Jörgen staged a reduced version of The Nutcracker to allow this popular classic to be seen in smaller venues. Jörgen followed this in 1998 with a similarly successful staging, co-produced with The Banff Centre, of Romeo and Juliet, which he also mounted the following year for the Hong Kong Ballet.

Since 1992 Ballet Jörgen has been resident at George Brown College in Toronto where Jörgen formed the School of Classical and Contemporary Dance, a pre-professional training program for students of ballet and modern dance and now known as George Brown Dance.

The company plays to an annual audience of about 50 000 people and has helped nurture the careers of several young Canadian choreographers, such as Jean Grand-Maître, Crystal Pite and Dominique Dumais. Ballet Jörgen received the Ontario Lieutenant Governor's Award for the Arts in 1996 and again in 1998 for its impressive accomplishments in forging partnerships with the private sector and within the community. The 2009 Touring Company of the Year Award was presented to Ballet Jörgen Canada by the British Columbia Touring Council.