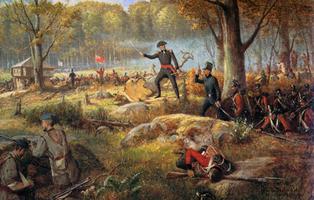 The Battle of the Châteauguay National Historic Site commemorates the Battle of Châteauguay, a battle in the War of 1812 that took place on 26 October 1813. Canadian troops, under the command of Lieutenant Colonel Charles-Michel de Salaberry, defeated a larger American force.

The national historic site is 50 km southwest of Montréal on the north bank of the Rivière Châteauguay between the towns of Très-Saint-Sacrement de Howick and Ormstown. The 1.56 hectares of property owned by Parks Canada is almost at the centre of the original battlefield, which extended for approximately 15 km.

The site was originally commemorated in 1895 by the federal government when it erected a stone obelisk at the small community of Allan’s Corner near the battleground. In 1920, the Historic Sites and Monuments Board designated it a national historic site. An interpretative centre opened to the public in 1978. The centre’s indoor lookout offers a panoramic view of part of the battlefield, and it also includes displays showing the daily life of a common soldier, a scale model, exhibit rooms, and an amphitheatre. There is also a 14 km trail between Ormstown and Howick that features 13 interpretive panels detailing the battle.

The Battle of Châteauguay

In the summer of 1813, the United States prepared for an expedition to invade Lower Canada with the goal of taking Montréal, thereby cutting British supply lines to Upper Canada. Two armies were involved in the American advance: that of Major General James Wilkinson via the St. Lawrence River, and that of Major General Wade Hampton via the Rivière Châteauguay. They intended to join forces at Île Perrot on the St. Lawrence River for the final assault on Montréal.

Approximately 1,500 Canadian and Aboriginal soldiers commanded by Lieutenant Colonel Charles-Michel de Salaberry confronted and halted Hampton’s force of more than 4,000 men. Salaberry had prepared and fortified a defensive position where the Rivière Châteauguay made a sharp bend, including building a log barricade that ran between the river and a swamp to the west. Only 300 of Salaberry’s forces engaged in the main battle. Through innovative devices and scare tactics, including blowing bugles in the woods and shouting to suggest a large force of defenders, Salaberry’s force of militiamen, Voltigeurs Canadiens, fencibles and Aboriginal allies were able to fight back the Americans, who soon retreated. Another 160 of Salaberry’s troops were positioned east of his position at a ford of the Châteauguay and prevented Hampton’s flanking force from crossing the river and attacking the defenders.

Wilkinson’s force was also not successful reaching Île Perrot, as it was defeated during the Battle of Crysler’s Farm and turned back after getting word of Hampton's defeat. Montréal was not seriously threatened for the remainder of the war.