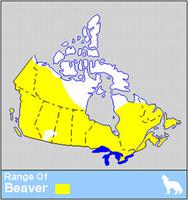 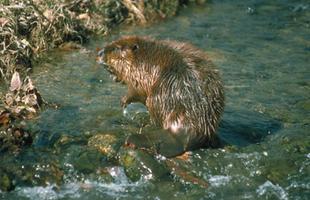 Beavers are superb swimmers, and can stay under water for 15 minutes (Corel Professional Photos).
PreviousNext

As an emblem of Canada the beaver goes back at least as far as the 17th century. The industrious, flat-tailed, rich-pelted animal was the staple of the fur trade which prompted Europe's first keen commercial interest in the new world; one was depicted on a coat of arms granted in the early 1600s to Sir William Alexander (who held Nova Scotia) by Charles I of England. It also appeared on the coat of arms of the newly incorporated city of Montreal in 1832 and on the first Canadian postage stamp in 1851. In 1865 in Montreal the anonymous 'Sam Scribble' wrote a musical satire with the title King of the Beavers. In song titles and sheet music cover illustrations, however, the beaver appears rarely by comparison with the ubiquitous maple leaf. The earliest-known instance is the cover of Joseph Maffré's Original Canadian Quadrilles (J.W. Herbert 1847), where it appears with the maple leaf, as it does on C.H. Moody's song 'Here's to the Land of the Beaver' (1900), N. McLeod's song 'Maple Leaf and Beaver' (1915), and N. Fraser Allan's 'Made in Canada Campaign Song' (1915). Le Castor (polka patriotique), by Guillaume Fleury d'Eschambault, published by J.W. Herbert, was advertised in 1857, and sheet music of the same composer's 'La Frontière' (chant national) and 'Nos Jours de gloire' (chanson Canadienne) had cover designs that featured the beaver. Danse du castor Canadien was recorded by the accordionist Tommy Duchesne for Starr in the 1930s. Gilles Vigneault's story 'Le Dict de l'aigle et du castor' was set to music by Claude Léveillée in what the composer called a 'spoken concerto'. Songs which have some reference to the beaver include Charles Harrison's 'My Own Dear Canada' (1917), the campfire favourite 'Land of the Silver Birch,' and Stringband's 'Show Us the Length'. Boosey & Hawkes published (no date) The Land of the Maple and the Beaver by Charles O'Neill.