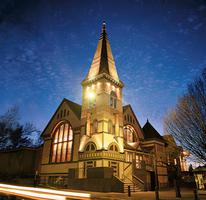 The Belfry Theatre is located in a 19th-century church (photo by T. Gregg Eligh).

The Belfry is Victoria's largest professional theatre company. Located since its founding in a 19th-century church designed by Thomas Hooper, the Belfry is noted for its commitment to Canadian and contemporary plays, and for the loyalty it has inspired from both the local community, which it has transformed, and from first-rank artists across the country.

The Belfry's history began in 1974, when University of Victoria graduate student Blair Shakel started making theatrical use of the unheated Springridge Chapel of the Emmanuel Baptist Church in the heart of the ailing Fernwood neighbourhood. For a year the Springridge Theatre was rented by various theatre groups, sharing the building with a youth hostel and a dental clinic.

In 1975, inspired by the model of the Vancouver East Cultural Centre and supported by federal Local Initiative Program (LIP) grants, Don Shipley took charge of the theatre and established the Springridge Cultural Centre. Pat Armstrong joined Shipley in 1976 as co-director of the (then-called) Belfry Cultural Centre, which initially served as an alternative booking facility for touring performances by Tamahnous Theatre, The Mummers, Codco, Theatre Passe Muraille, Lawrence Ferlinghetti, and the Kronos Quartet.

By 1977 the Belfry was producing its own shows. The first of these was Puttin' on the Ritz, a revue based on the songs of Irving Berlin. Created by Shipley and co-directed by Armstrong, it featured choreography by Judith Marcuse, sets by Ken MacDonald (Belfry's resident designer from 1977 to 1980), and an early-career performance by Sheila McCarthy. Ritz also inaugurated the association between the theatre and board chairman Patrick Stewart, whose thoughtful patronage continues to play a vital role in the Belfry's success.

In 1980-81 artistic directorship of the renamed Belfry Theatre passed from Shipley to James Roy. Roy's tenure (1980- 84) launched many characteristic Belfry traditions: an apprenticeship program with the University of Victoria's department of theatre; co-productions with other theatres; tours and remounts of its own shows in Vancouver, at the Shaw Festival (and later elsewhere); and a commitment to new Canadian plays.

Miles Potter presided over the Belfry from 1984 to 1986, difficult years in which the theatre reeled under an accumulated deficit and fell back on Broadway and West End hits, offering only 1 Canadian play in the 1984-85 season.

From 1986, under the artistic leadership of Glynis Leyshon (an occasional Belfry actor and director since 1977), the theatre entered a decade of growth. With the demise of Victoria's more mainstream Bastion Theatre in 1988 the Belfry lost its alternative theatre credentials, but redoubled its commitment to new work: between 1988 and 1990 world premieres of Canadian plays constituted the bulk of the repertory. In 1990 energetic fundraising enabled the company to buy the building from its landlord and co-tenant (the Victoria Cool-Aid Society) and to equip a second performance space. This 100- seat Studio Theatre has henceforth mounted annual new-play festivals in addition to the mainstage offerings of the 279- seat Patrick Stewart Theatre.

Notable premieres in the Leyshon years include Sally Clark's Moo, which represented Canada at the Cultural Olympic Games in 1988 (co-produced with Alberta Theatre Projects); Jovette Marchessault's The Magnificent Voyage of Emily Carr and John MURRELL's The Faraway Nearby in 1992 (the latter co-produced with Tarragon Theatre, and for which Nancy Beatty won a Dora Award for best actress); works by Morris Panych (1994 and 1995), Joan Maccleod (1989 and 1992), and Michel-Marc Bouchard (1995); and the world premieres of 3 of Dan Needles' 4 Wingfield plays, the best-selling, longest-running one-man shows in Canadian history (Wingfield's Progress, 1987, Wingfield's Folly, 1990, and Wingfield Unbound, 1997).

In 1997 Roy Surette took over as artistic director, bringing with him a Robert Lepage-inspired visual approach to staging, if a slightly reduced commitment to new work. By 1999 the Belfry's season had grown to 10 plays, its subscription audience to 4000, and its annual budget to $1.2 million (almost 80% of which is earned through non-government sources). General manager since 1987 is Mary Desprez.