Those may be welcome words to many of the high court's critics. Although the Supreme Court has escaped some of the opprobrium Canadians feel towards so many of their national institutions, there is still a swell of complaints that the court is tampering in areas best left to elected legislators.

This article was originally published in Maclean's Magazine on November 15, 1999

Those may be welcome words to many of the high court's critics. Although the Supreme Court has escaped some of the opprobrium Canadians feel towards so many of their national institutions, there is still a swell of complaints that the court is tampering in areas best left to elected legislators.This article was originally published in Maclean's Magazine on November 15, 1999 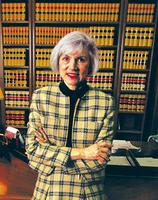 McLachlin is the first woman to head the Supreme Court of Canada (courtesy Maclean's).

There is not a hint of self-importance in Beverley McLachlin as she sits, so poised, at the judges' dining table in the most august of Canadian courthouses. On this grey Ottawa morning, two days after the announcement that she is to become the next chief justice of the SUPREME COURT OF CANADA, the 56-year-old McLachlin is answering reporters' questions about how she will lead a court that finds itself increasingly enmeshed in controversy: the last guardian of fairness and justice to many; a self-absorbed club whose rulings are far too intrusive for the liking of others. McLachlin may be slightly nervous for this meeting - she is not known for being a particularly skilled public performer. But she soon makes it clear that, if she has her way, the McLachlin court will lift its eyes from the lawbooks to take in the world outside its chambers as well. "You cannot divorce the law from the consequences," she says, both hands cutting the air for emphasis. "It is essential to good judging that the rule be sensitive to consequences, and that judges, when they make rulings, give some thought to how they are going to play out."

Those may be welcome words to many of the high court's critics. Although the Supreme Court has escaped some of the opprobrium Canadians feel towards so many of their national institutions, there is still a swell of complaints that the court is tampering in areas best left to elected legislators. It ranges from Albertans resentful of the court's decision to write protection for gays and lesbians into the province's human rights code, to non-aboriginal fishermen on the East Coast, where a recent court ruling to allow an unrestricted native fishery has led to chaos and violence. The result has been growing frustration that the Supreme Court is out of touch with Canadians, its judges locked in monkish retreat in their Ottawa chambers. It is an image McLachlin wasted no time in trying to dispel last week. "The law is not the preserve of the judges or a few lawyers," she said. "The law is the preserve of the people of Canada. And it's wonderful that people are interested in commenting on it."

Her easygoing candour is a departure from the chippy, defensive persona the court has presented to the public in recent months. Much was made last week of the fact that McLachlin will become the first woman chief justice, but the real significance of her appointment may be in her potential to conduct a makeover of the court's aloof, remote image. Antonio Lamer, the current chief justice whose retirement next January made way for McLachlin, was seen by many court watchers as a bit too taken with his title - and far too prickly about criticism. McLachlin showed no such tendencies last week. She talked quietly about the importance of her family on her life and work, professing no sense that the new title was about to radically alter her life. And she ducked any temptation to turn the moment of her appointment into high drama. The call from Prime Minister Jean Chrétien offering the job came while she was at her desk, McLachlin recalled. "And I said yes," she said, with an infectious laugh that made it clear the answer required no soul-searching.

Chrétien was happy to talk about the historic importance of McLachlin's appointment. "It was a great opportunity to have, for the first time, a woman as chief justice of Canada," the Prime Minister said in making the announcement. But no one in Ottawa, where McLachlin has long been considered the obvious next choice to lead the court, was suggesting gender got her the job. And while she agreed there was symbolic importance in having a woman at the top of a major national institution, McLachlin also made it clear that gender is not the only perspective she brings to her reading of the law. She recounted a story from her days as a lower court judge when, while hearing a divorce case, she assured a worried husband that "the fact I was a woman judge would not have any bearing on how I'd rule."

Her selection triggered a rare consensus of praise. "Though quiet and quietly spoken, she has a fire for the law that'd burn through the pouring rain," says Ottawa lawyer Eugene Meehan, who is president of the Canadian Bar Association and has known McLachlin since the early 1990s when he was the Supreme Court's executive legal officer. McLachlin's lack of apparent ideology means there is no easy rallying point for critics. "She's eclectic, somewhat unpredictable," says Queen's University law professor Don Stuart, commenting on McLachlin's uneven track record on issues such as the rights of the accused in criminal trials. But he adds that McLachlin has a well-deserved reputation as a thoughtful jurist, with the courage to support controversial rulings and write contentious dissents. Stuart cited, in particular, McLachlin's support for the court's 1991 decision striking down aspects of the so-called rape shield law - and allowing a woman's sexual history to be used as evidence, in some circumstances, in sexual assault cases.

McLachlin has also shown herself to be a staunch defender of free speech. In 1992, for example, she wrote for the majority in the Ernst Zundel case, when the court struck down a law prohibiting the "spread of false news," which had been used to convict the Holocaust denier. And she was with the majority when the court overturned Ottawa's ban on tobacco advertising in 1995, ruling it was an unreasonable infringement of speech. "That's the free-speech traditions of the West coming out," says Stuart.

Certainly the first westerner to head the court since Manitoba's Brian Dickson retired in 1990 will be closely watched west of the Lakehead, where the recent unhappiness with some Supreme Court decisions (especially over native rights) has resulted in the Ottawa-based body being tarred as a "foreign court." McLachlin was born in the Rocky Mountain foothills town of Pincher Creek, Alta. She studied philosophy at the University of Alberta in the 1960s, then switched to law, graduating top in her class in 1968. She moved to Vancouver with her then-husband Rory McLachlin, teaching and practising at a time when, as she recalled last week, "there were no women judges at all." She became one herself in 1981, first on a B.C. County Court, rising with breathtaking speed to be chief justice of the B.C. Supreme Court by 1988.

By the time Brian Mulroney appointed her to the Supreme Court of Canada in 1989, McLachlin was a widow. Rory died of cancer in 1988, and McLachlin's first years in Ottawa were spent juggling her heavy caseload (she is known as one of the court's more prolific writers) and raising her son, Angus, through what friends say were difficult teenage years. In 1992, she married Frank McArdle, an Ottawa lawyer who runs an annual law conference in Cambridge, England. He proposed to her over an airplane intercom on their way to Cambridge.

At 56, McLachlin could serve on the court for almost another two decades (the court's mandatory retirement age is 75). But the most crucial days may lie just ahead. Nothing is as important to a court as its credibility and legitimacy, McLachlin acknowledged last week - something her promise of a more open court was clearly designed to address. "I'm not fearful that judges will be adversely affected by criticism," she declared. It is time, she seemed to be saying, to hear the critics and to show humility at the enormous power judges wield over peoples' lives. It is time, the next chief justice was saying, that the high court let in a little light.