Canada at the 1936 Olympic Winter Games 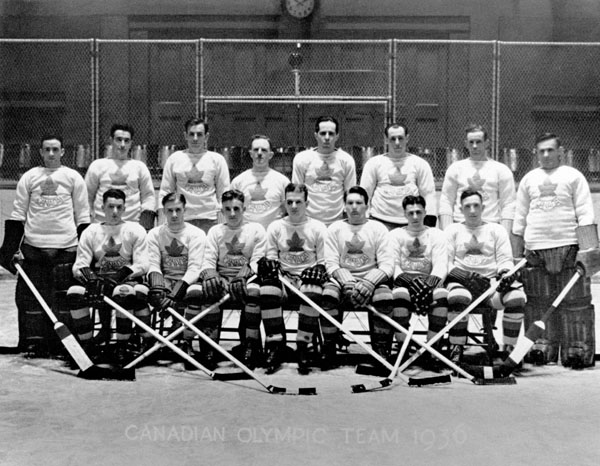 In 1931, the International Olympic Committee (IOC) awarded the 1936 Olympic Winter and Summer Games to Germany, marking the country’s return to the international community after the First World War. (At the time, the Summer and Winter Games were held in the same year, and the host of the Summer Games had the right to organize the Winter Games as well.) However, the liberal democratic Weimar Republic collapsed soon after, and by 1933 Germany was led by Chancellor Adolf Hitler and his National Socialist German Worker’s Party, or Nazi Party.

In 1935, the German government passed the Nuremberg Laws, which stripped German Jews of their citizenship. Various left-wing and Jewish groups urged Canada (and other countries) to boycott the 1936 Games but were unsuccessful. Despite public protests and letter-writing campaigns, the Canadian Olympic Committee spent little time discussing the proposed boycott. In total, 28 countries and 646 athletes participated in the Olympic Winter Games, which were held in the Bavarian resort town of Garmisch-Partenkirchen, near Austria.

The Games were an exercise in public relations for Nazi Germany. According to Matthew Halton of the Toronto Daily Star, who attended the Games, Germany’s minister of propaganda, Joseph Goebbels “instructed all Nazi orators to take a rest until after the Olympics.” All anti-Semitic signage around Garmisch-Partenkirchen was removed, and the town council delayed an order to expel all Jews from the area. Participants and spectators were impressed with the beautiful scenery, world-class venues and warm welcome from their German hosts. It was the first Winter Games at which the Olympic flame burned and the first covered by official film and radio reporters. It was also well attended, with some 500,000 spectators bused to events on the final day alone. Press coverage of the Games was mostly positive (with the exception of the Star’s Matthew Halton), despite the fact that only months before, Canadian newspapers had published articles critical of the Nuremberg Laws and anti-Jewish riots in Germany. 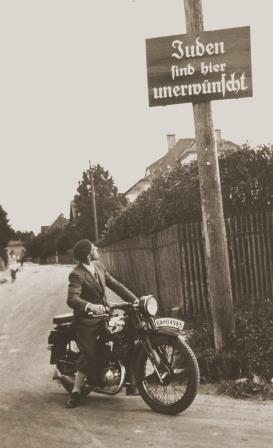 A young man on a motorcycle looks up at a sign posted on a telephone pole that reads, "Jews are not welcomed here," Germany, circa 1935.

Although at least one Canadian athlete (skier Lukin Robinson) declined to participate in the Games on ideological grounds, many seemed — at best — to be unaware of the wider context or implications of the Games. This was evident in the opening ceremonies, during which member nations marched past Olympic and German dignitaries accompanied by 400-piece marching bands. When Canadians gave the traditional Olympic salute to Hitler and other officials, with arms stretched out straight to the side, the crowd mistook it for the Nazi salute and cheered. The same happened at the Olympic Summer Games in Berlin later that year. A photograph from the Games also shows members of the Canadian figure skating team requesting autographs from Hitler and Goebbels. 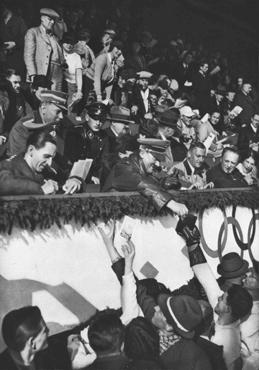 Adolf Hitler and Joseph Goebbels sign autographs for members of the Canadian figure skating team at the 1936 Winter Games.

The general impression among Canadian athletes seems to have been positive. As one figure skater remarked to Matthew Halton, he could no longer believe the negative reports the journalist had written about Nazi Germany, as “no people as courteous as these could persecute Jews or militarize a whole country.”

The 1936 Olympic Winter Games marked the beginning of a decades-long dispute about where to draw the line between eligible amateurs and professionals. Although it was the first Olympic Winter Games to include alpine events, the Austrians and Swiss boycotted these events after their best skiers (who earned their living as ski instructors) were disqualified for being professionals. 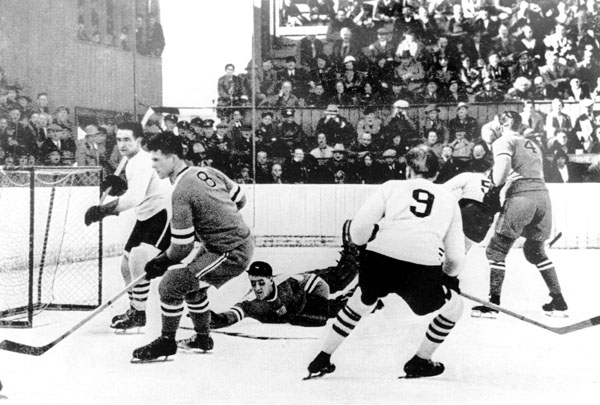 Canada's men's hockey team, represented by the Port Arthur Bear Cats, compete in hockey action against the United States at the 1936 Garmisch-Partenkirchen Olympics. Canada won the silver medal in the event. 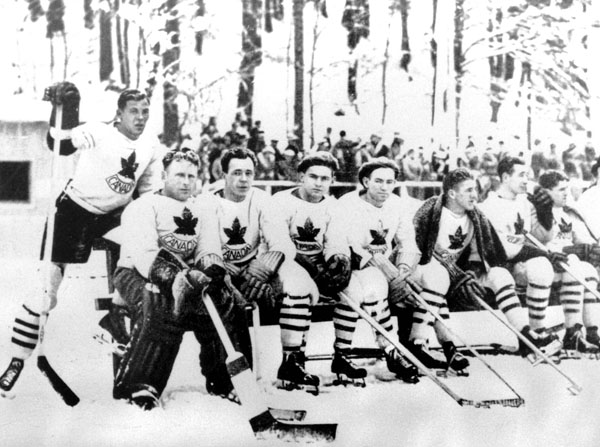