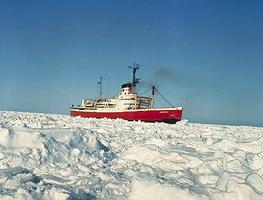 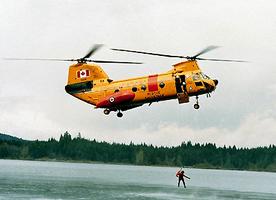 The CCG was founded as the "Marine Branch" of the Department of Marine and Fisheries in 1867. In 1936 it came under the jurisdiction of the Department of Transport, Marine Services, and in 1962 was officially named the Canadian Coast Guard. On April 1, 1995, it left the jurisdiction of the Department of Transport and merged with the Department of Fisheries and Oceans. The distinctive red-and-white vessels of the CCG fleet are stationed at the 5 CCG regional offices (Western, Central, Laurentian, Maritimes and Newfoundland, with their headquarters at Vancouver, Toronto, Québec City, Dartmouth and St John's) as well as at 11 strategically located bases and 5 subbases. The fleet consists of 56 major vessels as well as 35 helicopters and one fixed-wing aircraft. In addition to the larger ships, there are 74 frontline rescue vessels and 4 hovercraft.

The responsibilities of the CCG under the National Transportation Act and other applicable legislation are icebreaking, search and rescue, aids to navigation and northern resupply. The CCG also has a regulatory responsibility under the Canada Shipping Act with respect to ship inspection and standards. The CCG provides and maintains some 13 000 channel buoys and 10 000 land-based aids of which 266 are major lighthouses; 33 coastal radio stations and 15 vessel traffic centres provide navigational hazard and weather advice. By the end of the 1960s, automated equipment was making manned lighthouses obsolete. Between 1970 and 1996, 264 lighthouses were automated, but 60 were still staffed. By the beginning of 2000, only the lighthouse at Machias Seal Island will be manned for sovereignty reasons.

The powerful fleet of Icebreakers aid navigation along the East coast, across the North and through the Great Lakes-St Lawrence system. In addition to allowing vessels to operate more safely and economically, the icebreaking activity also contributes to flood control and shoreline protection. Of the 18 icebreakers in the fleet, five are dedicated icebreakers and 13 are multi-tasked ice-strengthened vessels. The 55 permanent and seasonal SAR stations provide year-round search-and-rescue services, staffed by CCG specialists assisted by a Coast Guard Auxiliary of volunteers trained in search-and-rescue techniques. Northern resupply activities in the Arctic and along the Mackenzie River ensure the continued existence of remote settlements.