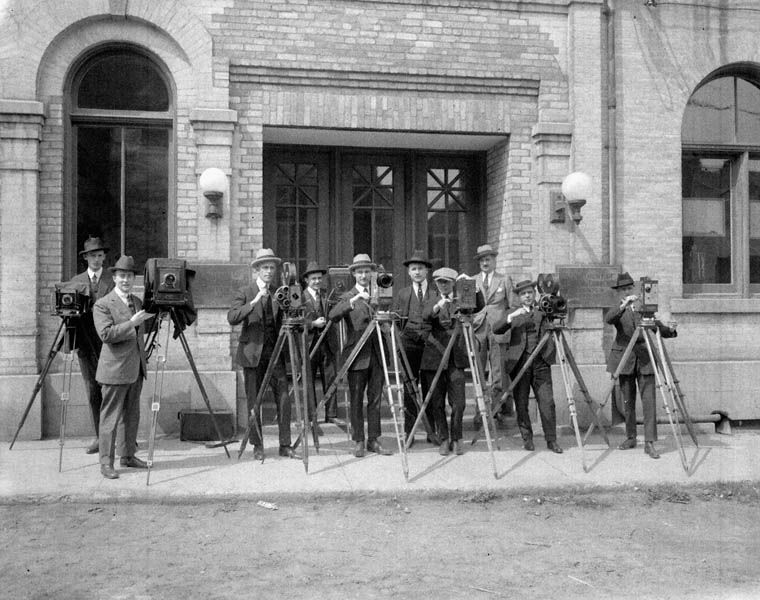 A group of cameramen outside the Canadian Government Motion Picture Bureau, Ottawa, Ontario, 1923.

The Exhibits and Publicity Bureau was established by a federal order-in-council in September 1918, and was renamed the Canadian Government Motion Picture Bureau on 1 April 1923. In its early years, the Bureau produced a series of short informational films called Seeing Canada and distributed it theatrically in Canada and abroad. By 1920, the Bureau maintained the largest studio and post-production facility in Canada. Its success in distribution was primarily in non-theatrical screenings, though some of its films were also shown in theatres. The bureau distributed its films to all the Commonwealth countries as well as France, Belgium, the Netherlands, Argentina, Chile, Japan, China and the United States. At its peak in 1927, the Bureau had more than 1,000 film prints available in the US alone.

For all its success at operating a large production unit and distribution network in the fulfillment of its mandate, the Bureau never took steps to develop a domestic film production industry in Canada and in fact actively discouraged it, favouring instead a business model that saw Canada as a branch plant of the American industry (see Staple Thesis). Bernard E. Norrish, the Bureau’s first director, went on to become head of Associated Screen News and stated that Canada “had no more use for a large moving picture studio than Hollywood had for a pulp mill.” Raymond Peck, the Bureau’s director from 1920 to 1927, was closely associated with Hollywood and once stated that he was “attempting at all times… to induce American capital and manufacturing interests to come into Canada and establish branch factories…. American motion-picture producers should be encouraged to establish production branches in Canada and make films designed especially for British Empire consumption.”

Peck’s successor, Frank Badgley, continued the Bureau’s emphasis on travelogues and industrial films through the 1920s and 1930s, with sporadic attempts at more meaningful projects, such as Lest We Forget (1935) and The Royal Visit (1939). Financially hamstrung during the Depression, the Bureau didn’t convert to sound films until 1934, by which time it had lost most of its theatrical markets. It was effectively replaced in 1939 by the creation of the National Film Board (NFB), which officially absorbed the Bureau in 1941.