Canadian Inuit dogs are members of the spitz family of dogs. Males can reach about 70 cm in height and weigh between 30 and 40 kg. Females are usually considerably smaller. Coats range in colour from red, white, grey, black, brown or any combination of these colours. A dense undercoat insulates the dogs in the coldest temperatures. Males tend to have a longer coat than females, as well as a mane of longer fur that surrounds their neck and shoulders. Both sexes have bushy tails that curl over their backs, upright ears and sturdy bodies. 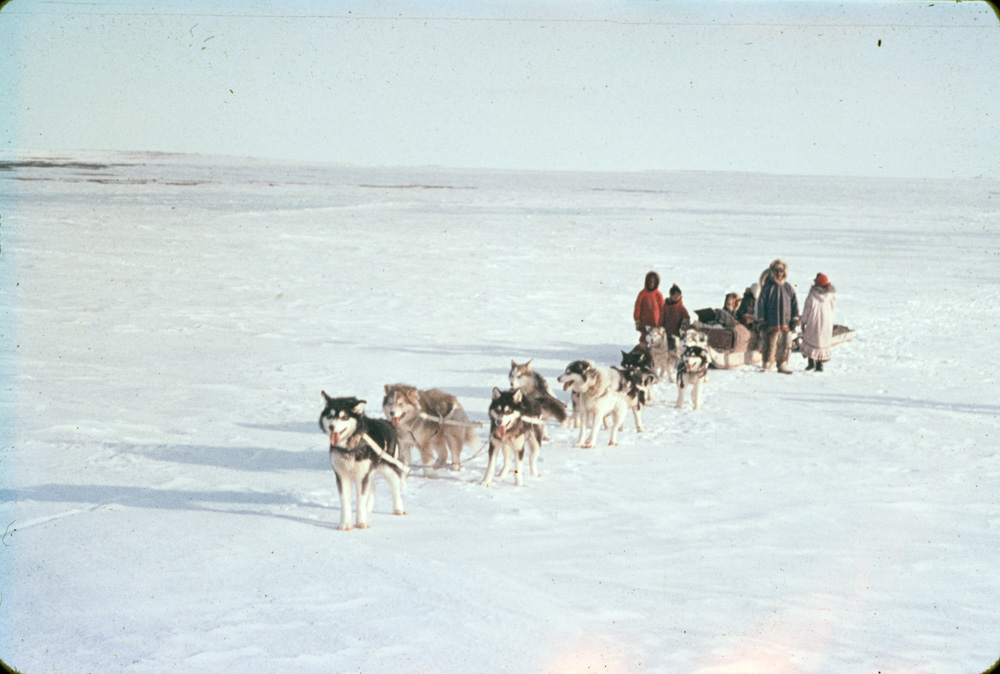 A group of Inuit and their dogs during a seal hunt on Victoria Island in the Canadian Arctic. Photo taken in 1962.

Canadian Inuit dogs descend from dogs used by the Thule, ancestors of the Inuit, about 1,000 years ago. Archeology shows that the Thule harnessed the dogs to sleds, opening up the Arctic and Subarctic to fast, efficient travel and transportation of goods (see Dogsledding).

Did you know?
In a Labrador Inuit creation story a great flood recedes revealing the world below. A mountain emerges from the waters and on it is the first Inuit family. Together with their dog team they set off from the mountains to explore the Nuna, Inuktitut for “the land.”


The sleds Canadian Inuit dogs pull come in a variety of shapes and sizes and are known as qommatik in some Inuktitut dialects. Both male and female dogs were a part of sled teams. Each dog was expected to pull about 45 to 80 kilograms, including the sled, musher, and cargo. Dogs were known to cover distances of 25 to 120 kilometers a day, depending on their load, the number of dogs on the team, and conditions. In addition to providing transportation, the dogs were also vital to hunting parties. Their keen sense of smell could help hunters find seal breathing holes in the ice, track prey, and retrace routes lost under heavy snows.

Until the mass introduction of snowmobiles in the latter half of the 20th century, nothing surpassed sled dogs for Arctic travel. Today, most sled dogs kept in Inuit communities are not pure bred Canadian Inuit dogs, however, sled dogs remain a vital part of Inuit culture.

When European traders, trappers, missionaries and explorers encountered the Inuit, they soon adopted dogsledding as a primary means of transportation. Canadian Inuit dogs were used in the fur trade and for a number of Arctic and Antarctic expeditions, including the Canadian Arctic Expedition. 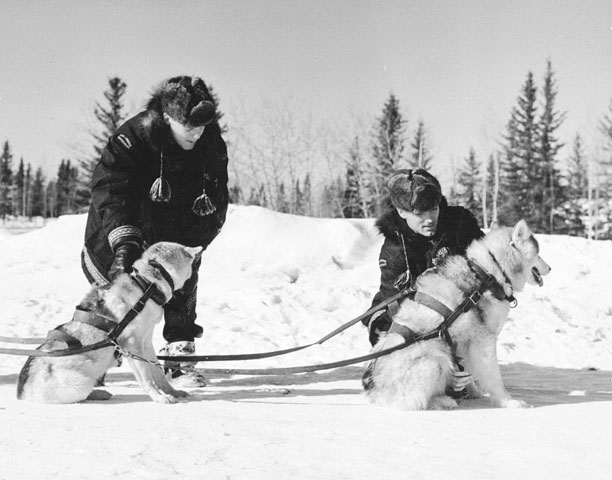 Two members of the Royal Canadian Mounted Police hitch Canadian Inuit dogs into their harness before going on patrol. Photo taken in 1957.

In the 1950s until the 1970s, tens of thousands of Inuit sled dogs across the Eastern Arctic were killed, primarily by the Royal Canadian Mounted Police. In the 1920s, between 10,000 and 20,000 Canadian Inuit dogs were estimated to live in Northern Canada. By 1963, there was only one “Canadian Eskimo dog” registered with the Canadian Kennel Club, and the breed was declared extinct.

The RCMP say dogs were killed for reasons of public health and safety. In many instances, they were enforcing the Ordinance Respecting Dogs. This law was enacted in the Northwest Territories in 1929. The Ordinance made it illegal for dogs to run loose in certain areas. It gave dog officers, including the RCMP, the authority to catch roaming dogs and kill them should they not be claimed within a certain time frame. Up until 1966, the Ordinance required authorities to warn owners before their dogs were killed. Owners would have the option of paying a fine in order to have their dogs released, something many Inuit could not afford. In 1966, these measures were removed, and dog officers were able to kill, without warning, any dog acting in a threatening manner or destroying equipment or stores of food. While the Ordinance originally applied just to the Mackenzie District in the Northwest Territories, its geographic scope expanded through various amendments. These geographic expansions coincided with the expansion of White settlement in the Arctic.

Inuit saw the dog killings as part of the Canadian government’s systematic effort to force Inuit into year-round settlements and abandon their semi-nomadic way of life. They did not understand White people’s desire to manage the animals by tying them up or otherwise constraining them. Having lived with the dogs for centuries, the Inuit understood that the animals needed constant exercise in order to maintain the strength necessary to pull sleds. At the time, the Canadian government had other policies aimed at forcing the Inuit into permanent settlements, including forced relocations, residential schools and welfare payments. While these policies were the primary form of coercion, most Inuit view the killing of sled dogs as part of the government’s overarching assimilation strategy.


The dog killings were devastating for Inuit. Without dogs they could not travel and had to abandon winter homes, traplines, hunting grounds and ice fishing spots. At the time, snowmobiles were unreliable and too expensive for most Inuit to purchase. For the first time in their history, Inuit were cut off from the Nuna and confined to communities year round.

In 2019, the Canadian government apologized to Inuit in the Eastern Arctic for the dog slaughter, and committed to funding an Inuit sled dog revitalization program.

In 1972, nine years after the Canadian Inuit dog was declared extinct, the Canadian Eskimo Dog Research Foundation was founded with assistance from the Canadian Kennel Club and the federal government. The foundation scoured remote Inuit villages and found a small population of pure bred Canadian Inuit Dogs. In 1986, the first dogs registered with this project were bred, creating the genetic stock on which the breed rests on today.