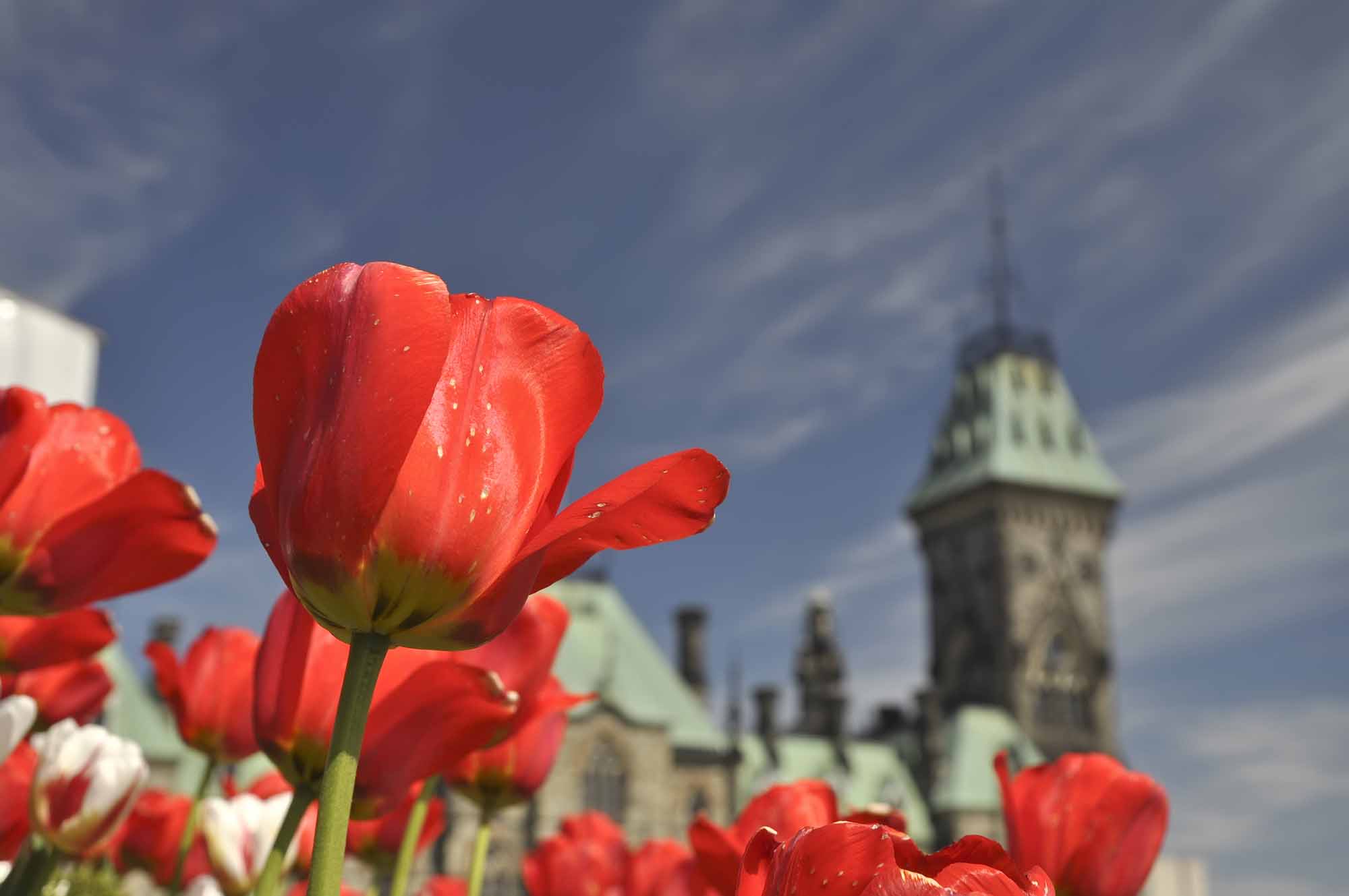 In 1940, the German military invaded the Netherlands, beginning an occupation that lasted five years. Following the invasion, members of the Dutch royal family were evacuated to the United Kingdom to avoid capture. However, the threat of German bombing raids meant that England was not completely safe. For this reason Princess Juliana, next in line to the Dutch throne, and her daughters, Princesses Beatrix and Irene, retreated to Canada and settled in Ottawa. In January 1943, Juliana gave birth to a third daughter, Princess Margriet Francisca. Margriet was born at Ottawa’s Civic Hospital. The Government of Canada temporarily declared her place of birth as outside of Canadian territory. This meant that Margriet could hold Dutch citizenship and therefore still be eligible for the Dutch throne. 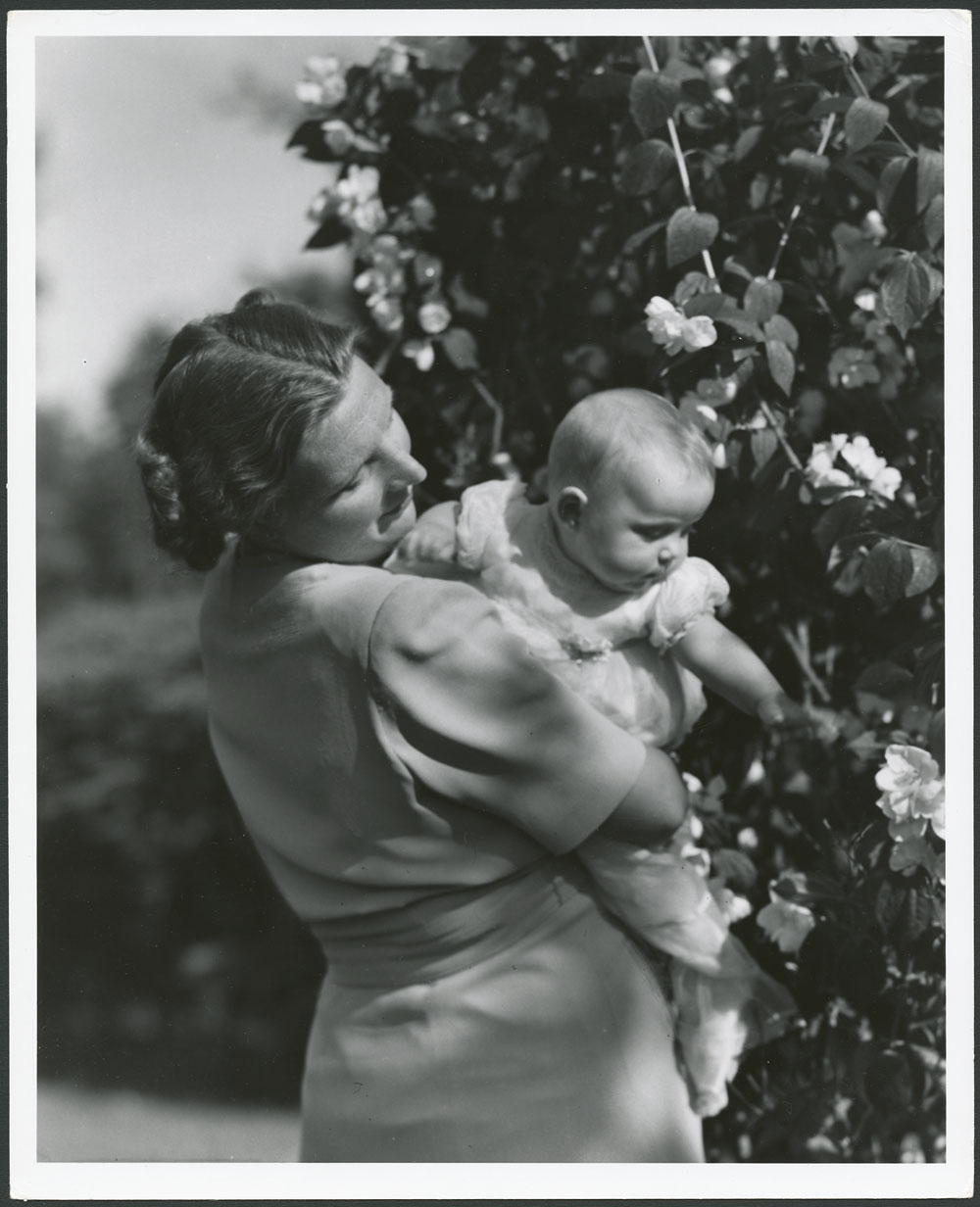 After the Allies liberated the Netherlands in 1945, the Dutch royal family returned home. Shortly after her return, Princess Juliana presented 100,000 tulip bulbs to Canada in gratitude for the significant role played by Canadian troops in liberating the Netherlands and for providing her family with a safe haven during the war. The following year she sent 20,500 tulip bulbs. Juliana continued to send thousands of bulbs as an annual gift. She continued this tradition after she became queen in 1948. The gift of tulips is an ongoing tradition. Each year the people of the Netherlands and the Dutch royal family each send 10,000 bulbs to Canada in recognition of the close ties between the two countries.

The gift of tulip bulbs and their annual bloom in Ottawa attracted interest and visitors. Over time the tulip displays became a growing tourist attraction. Every spring, photographs of the colourful tulips were printed in newspapers and magazines across the country. One of the photographers drawn to the spring tulips was Armenian-born photographer Malak Karsh. Karsh immigrated to Canada from Turkey in 1937. Karsh was a well-known photographer. In 1949, he photographed the first tulips sent by Princess Juliana blooming on Parliament Hill. In 1952, Karsh suggested the idea of a tulip festival to the Ottawa Board of Trade. The first Canadian Tulip Festival took place in 1953. The festival opened with an inauguration ceremony on Parliament Hill. That year, the festival featured over 750,000 tulips planted throughout the National Capital Region. The first festival proved popular, and it became an annual event. Karsh is considered the founder of the Canadian Tulip Festival. There is a tulip bed across the river from Parliament dedicated to him and planted with his favourite variety every year.

The tulips on display every spring include those planted by the National Capital Commission (Ottawa’s official gardener), and those grown by local residents and businesses. The biggest display is located in Commissioner’s Park near Dow’s Lake, featuring over 300,000 flowers. Other tulip beds are located in nearby Queen Juliana Park, Montcalm-Taché Park in Gatineau, Major’s Hill Park in downtown Ottawa and Olympic Garden on the Rideau Canal. The tulip bulbs from the Netherlands are planted in two flower beds. One of the flower beds is at the Ottawa Hospital, Civic Campus, to commemorate Princess Margriet’s birth. The other is the Queen Juliana Gift Bed in Commissioners Park. Beyond the tulip displays the festival has also featured concerts, 5-foot painted tulip sculptures, floral artwork, children’s activities and fireworks. The festival is one of Ottawa’s top tourist events.

In 2001 the tulip became Ottawa’s official flower. To mark the festival’s 50th year in 2002, Canada Post issued a series of commemorative stamps and plates featuring the flowers. Princess Margriet has returned to visit Ottawa many times, including helping mark the festival’s anniversary in 2002. The mid-2000s were a difficult time for the festival. Several stretches of cold, wet weather impacted ticket sales for large concert acts. As a result, the festival filed for bankruptcy protection in 2006. In the following years the festival began to focus more on international friendship and the festival’s historical origins, an approach that has resulted in increased attendance. Spring 2015 saw the unveiling of a sculpture to mark the 70th anniversary of the liberation of the Netherlands and the start of the tulip legacy. The sculpture depicts an infant Margriet with her mother in a tulip setting.

In the spring of 2020, the Canadian Tulip Festival planned to mark the 75th anniversary of the liberation of the Netherlands. However, due to the COVID-19 pandemic, the event was forced to move online. Even organizers permitted residents to walk through the gardens but encouraged them not to stop or linger in order to avoid crowds of people. Among other online programming, organizers offered a virtual garden tour. In addition, festival staff delivered bouquets of tulips to local hospitals as a way of thanking health care workers for their work during the pandemic. After two years of online programming, the Canadian Tulip Festival resumed in-person activities in May 2022. The festival, which celebrated its 70th anniversary in 2022, was opened by Princess Margriet and her husband, Professor Pieter van Vollenhoven. 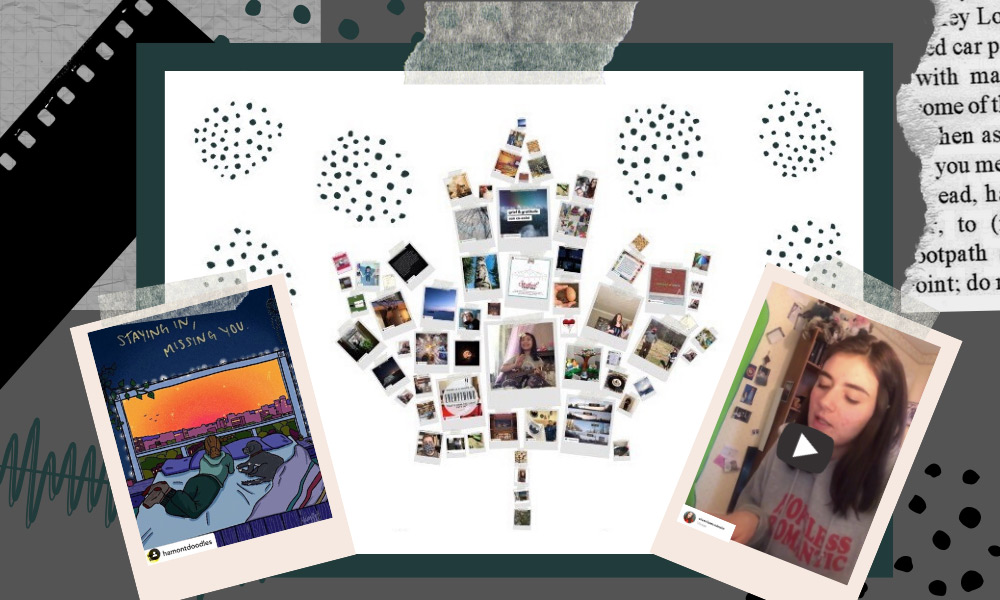