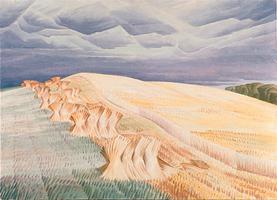 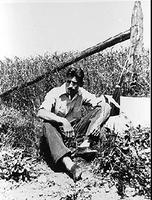 A sensitive interpreter of rural southern Ontario scenery, Schaefer chose to concentrate on agrarian and social rather than wilderness themes (courtesy Robert Stacey). 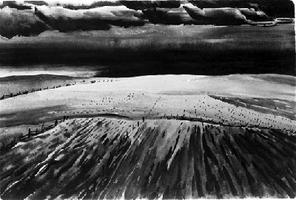 Carl Schaefer's best work was inspired by the farm environment of his native Grey County in Ontario (gift of the J.S. Maclean Coll/courtesy AGO). 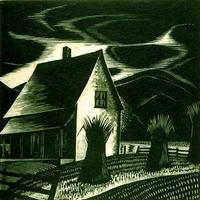 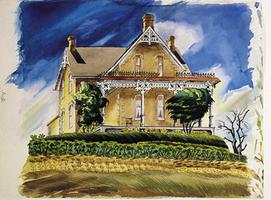 Carl Fellman Schaefer, artist, teacher (b at Hanover, Ont 30 Apr 1903; d at Toronto, Ont 21 May 1995). A vigorous yet sensitive interpreter of rural southern Ontario scenery, Schaefer is typical of regionalist Canadian artists who chose to concentrate on agrarian and social rather than wilderness themes during the 1930s. His best work was inspired by the farm environment of his native Grey County. He studied at the Ontario College of Art (1921-24), where his teachers included Arthur LISMER and J.E.H. MACDONALD. His introduction to northern Ontario came in 1926 with a canoe trip to the Pickerel and French rivers, but he was forced by the Depression to re-establish himself and his family at Hanover, where he took up watercolour painting.

His first "Hanover period" (1932-42) was marked by a transition from a decorative and geometric to a starkly realistic, occasionally allegorical approach to landscape and still life. His experience as an official war artist with the RCAF (1943-46) darkened his vision, but by the 1950s he was again painting in a broad, lyrical spirit in the countryside around Hanover and in neighbouring Wellington and Waterloo counties. Schaefer began teaching in 1930 and taught at OCA from 1948 to 1970. Three major Schaefer exhibitions were mounted and circulated during the artist's lifetime: by the McCord Museum, Montréal, in 1967; by the Robert McLauchlin Art Gallery, Oshawa, Ont, in 1976; and by the Edmonton Art Gallery in 1980. His paintings in the show "Canadian Landscape" toured European galleries (1983-85). He has received numerous awards and honours.