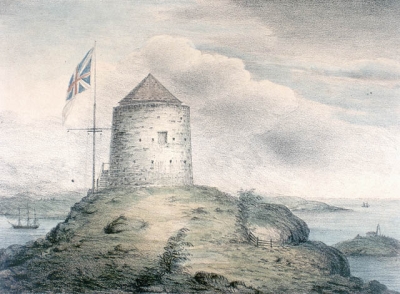 During 1813 Royal Engineers and local military built this massive Martello tower on a hill above the harbour of Saint John (lithograph by William S. Pendleton after William Henry Hunt, courtesy Library and Archives Canada/C-002981). 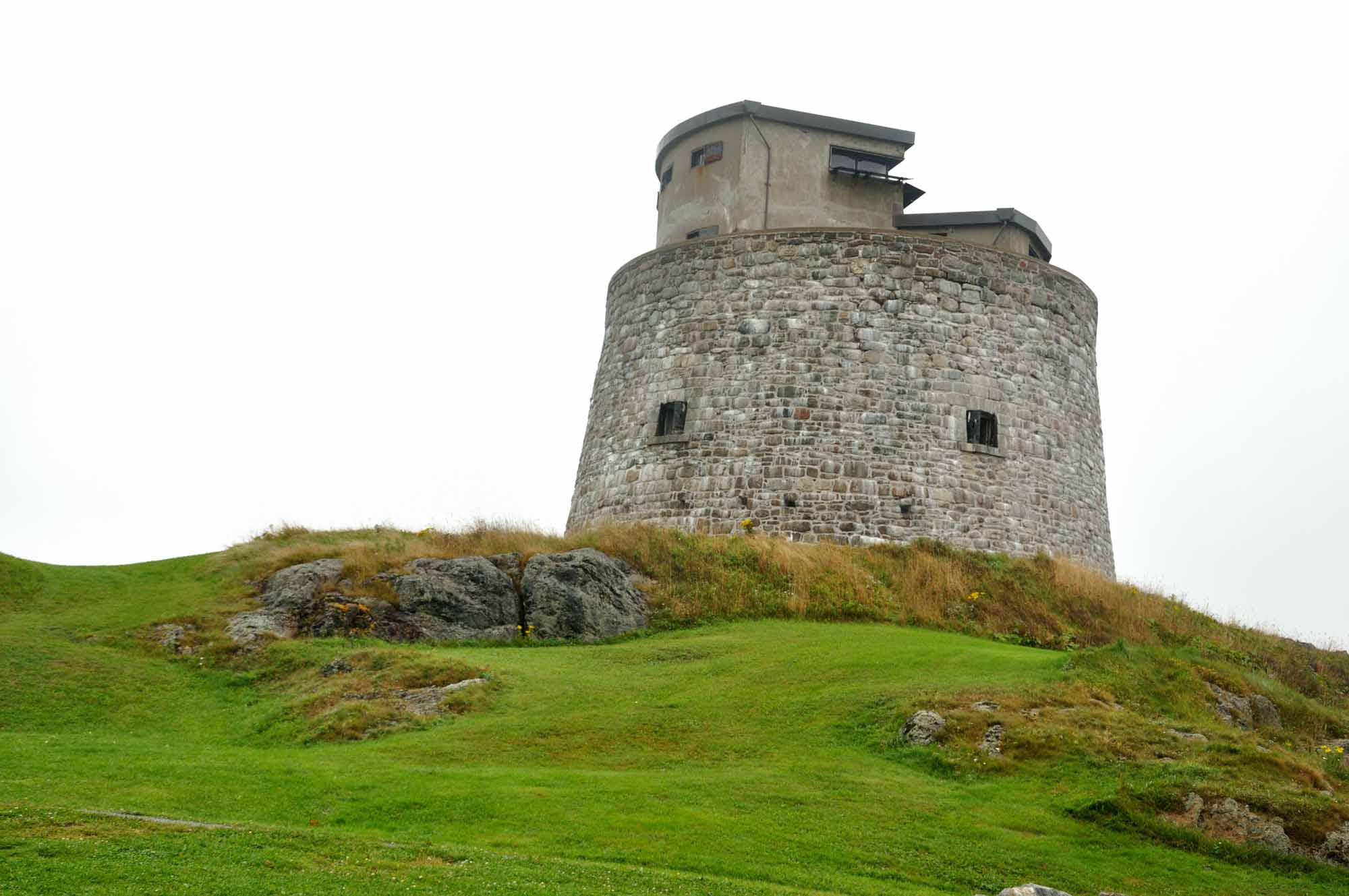 Carleton Martello Tower is a site dates back from the War of 1812. It played a critical role in Saint John, NB until the Second World War. Photo taken on: September 8, 2011
PreviousNext

Located in SAINT JOHN, New Brunswick, Carleton Martello Tower National Historic Site sits on a commanding height of land dominating the surrounding landscape and harbour approaches. Built by the British during the WAR OF 1812, the original 9-metre-high tower and gun deck measuring 15 metres across its base was intended to protect the western approaches to the city from a potential American attack.

When the United States declared war against Great Britain, military planners became concerned with the weak defences protecting New Brunswick's largest and most important port. To bolster its defences, Royal Engineers decided on a round stone tower in Carleton on Lancaster Heights.

Aside from its military importance, the new tower represented a further refinement of British fortification technology. The use of towers of this design is traced back to the British experience at Cape Mortella (Corsica) in 1794 when British forces encountered great difficulty in overcoming a similar tower. Not only were these towers effective but they were relatively inexpensive. Subsequently, the Royal Engineers developed conceptual plans, which they utilized throughout the British Empire. Carleton Martello Tower is a classic example of this fortification design.

Construction began in 1813 but the tower was not completed until the spring of 1815, after the war had ended. Without the urgency for stronger defences, retrenchment and neglect characterized the military's attitude toward their new tower. Its usefulness was only revived during times of diplomatic or military crisis, such as the FENIAN threat in 1866 when the tower was finally armed. By this time, however, technological improvements in artillery had made the tower obsolete from a military standpoint. Shortly after CONFEDERATION, the tower was turned over to Canadian authorities for use by the militia.

Over the next 50 years, the tower had various uses: militia training, magazine and military stores. Repairs continued as the ravages of the maritime climate took its toll on the aging structure. It was during this period that the tower began to assume a new importance to the local community. Not only did it symbolize a continuing commitment to defend Saint John, it also began to assume the role of tourist attraction.

Despite its increasing military obsolescence, the outbreak of WORLD WAR I resulted in new life for the tower as a military prison and potential observation post. With that war over, the Carleton Martello Tower again sat unused. After much debate, the property was transferred to the National Parks Branch in 1923; it was designated as a national HISTORIC SITE the following year. Throughout the interwar period, extensive repairs were made to what was becoming one of Saint John's premier tourist attractions.

In June of 1939 before the outbreak of WORLD WAR II, the military decided to reclaim the tower for use as a fortress observation post and the fire command centre for the area's coastal defences. A 2-storey concrete superstructure was constructed on the tower's gun deck to accommodate the sophisticated communication and tracking equipment needed for its new role. It remained the heart of the Saint John Defences until 1944. The tower had played its final military role in the defence of Saint John. By 1948, it had resumed its former role as a national historic site and is now one of Saint John's most popular tourist attractions.