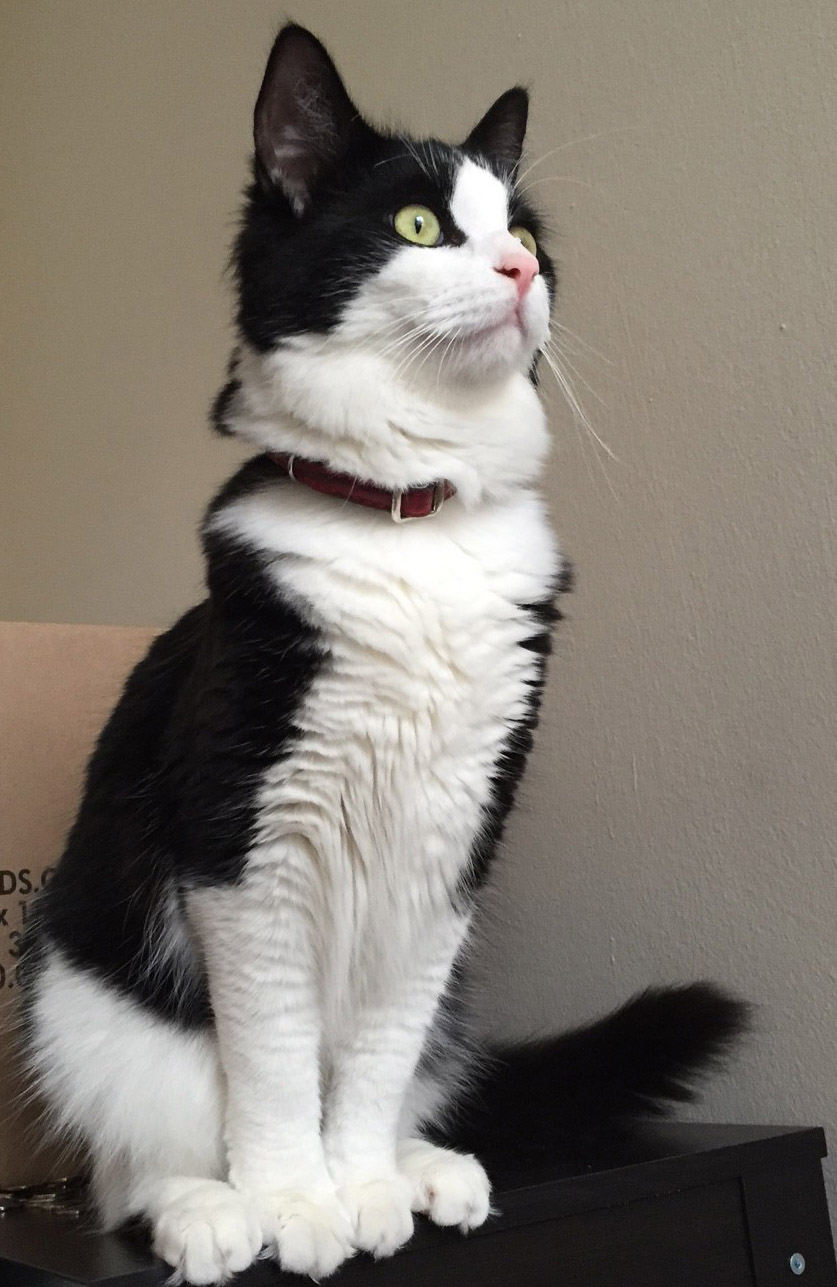 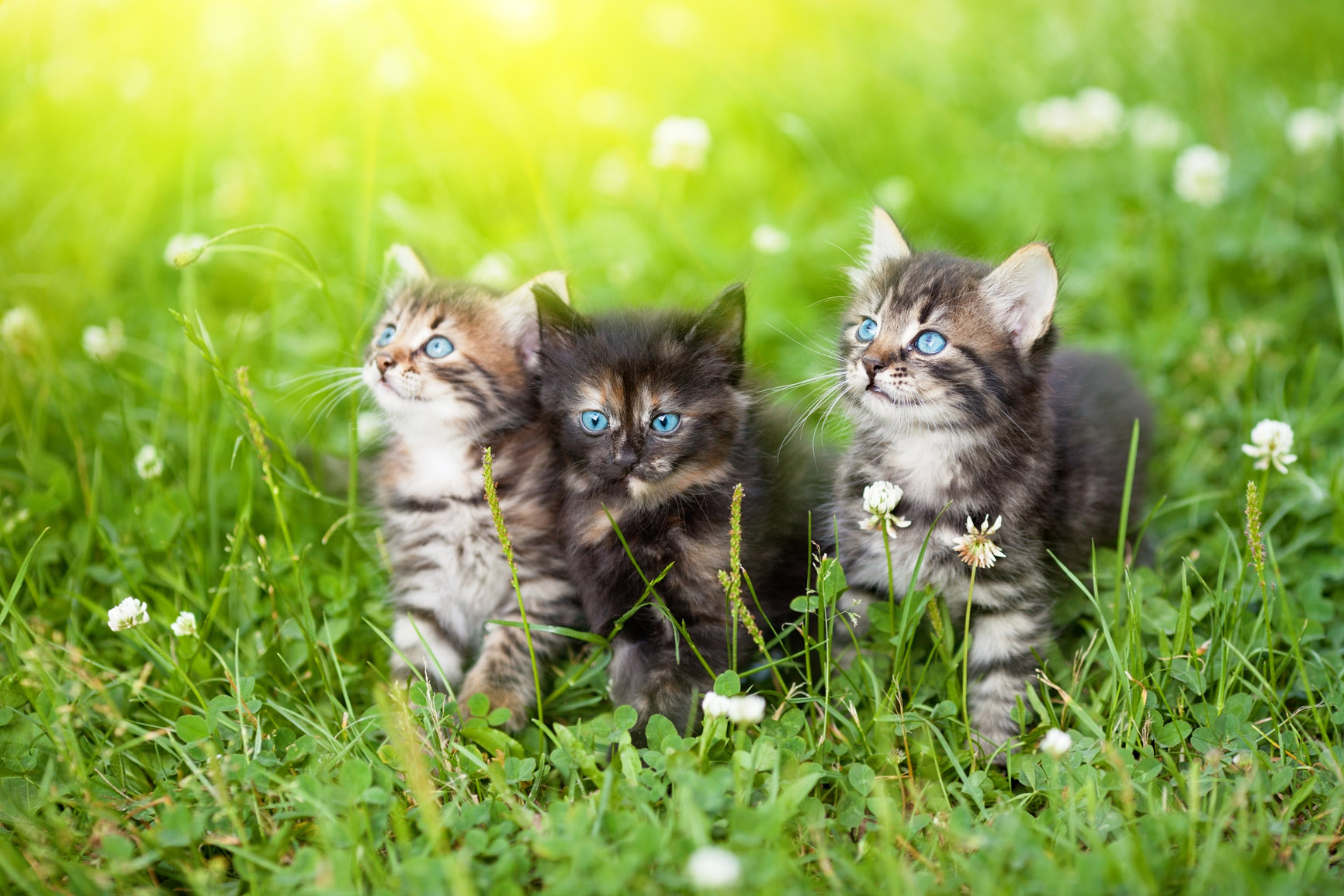 The domestic cat, a species of flesh-eating mammal belonging to family Felidae, order Carnivora, is a small, lithe, intelligent, soft-furred animal. About 4.8 million domestic cats inhabit Canada, averaging 2.4 per cat-owning household (just over 1 in every 2 households).

The origin of the domesticated cat is shrouded in mystery. Scientists speculate that a long-extinct animal, the small arboreal miacis, existed 40-50 million years ago and was probably ancestral to the bear, weasel, fox, coyote, raccoon, dog and cat. Another very agile animal which more closely resembled today's cat, the dinictis, is thought to have appeared 10 million years later.

It is now generally accepted that house cats originated in the African wildcat, Felis catus lybica, which later interbred with the European wildcat, F. c. silvestris. The earliest evidence of domesticated cats can be traced to ancient Egypt about 2500 BC. Egyptians held the cat in great esteem, worshipping it and protecting it from injury.

Phoenician trading ships are thought to have brought the first domesticated cats to Europe around 900 BC. Romans are believed to have introduced the cat to England. It was not until settlers arrived from Europe with their domesticated cats that cats were kept as pets in North America.

Feline structure is mammalian and, in many respects, similar to that of humans physiologically and anatomically. The cat's skeleton has about 244 bones (nearly 40 more than the human adult). This extremely flexible skeleton, controlled by more than 500 skeletal muscles, gives the cat its ability and fluid motion. This superb mechanism is geared for enormous bursts of power, but the cat has little sustaining vigour.

Unlike most animals, which move the left front leg with the right hind leg, the cat walks or runs by moving the front and hind legs on one side, then those on the other. The cat walks or runs on its toes with the heels up. Movement is silent because the paws are thickly cushioned.

A cat's main defensive weapon is its claws (normally 5 in front, 4 in the back), which are extended or retracted by means of flexor tendons. Curved and very sharp, they are well adapted for grasping prey. The cat's 30 teeth (16, upper jaw; 14, lower) are the most specialized teeth among carnivores. Cats cannot chew; their food is cut and torn, not crushed or ground. Their teeth are also used for grasping and holding.

Cats' skin is exceptionally quick to regenerate and to fight off infection entering through a wound. Coat hairs are shed continuously, but, to a greater degree, seasonally.

Cats' eyes have swift accommodation (the power of adjusting focus to distance) and can function equally well in almost complete darkness and in bright daylight. A cat has supersensitive hearing and can perceive ultrasonic sounds far higher in pitch than humans can detect. It can respond to sounds as high as 65 kilohertz.

A cat's sense of touch can be compared with that of an insect. Every hair is sensitive, including eyebrows, whiskers, cheek hairs, and ear tufts, as are the tip of the nose and the paw pads. The sense of taste and smell are closely allied. Cats select and find their food through olfaction. The cat's tongue has several functions associated with grooming and eating, and is the primary organ of taste.

The Canadian Cat Association (CCA) recognizes 45 breeds. These breeds have developed gradually, either naturally or by deliberate selective breeding. Cats are of 2 types: the very popular house cat, product of chance mating of different breeds; and the purebred, belonging to a breed with recognized characteristics maintained through generations of unmixed descent. Generally, purebreds are divided into long-haired and short-haired breeds.

Cats have diverse coat colours and patterns. They can be one solid colour or can have more than one colour arranged in a pattern, as in tabbies, tortoiseshells and calicos. They can also be point coloured as in Siamese, Birman, Balinese and Himalayan groups.

Cat fancy in Canada developed gradually. The first recorded show, a 2-day event with one officiating judge, was held in 1906 in Toronto. Most of the original purebred stock was imported from England. During the war years (1939-45), cat breeding and showing was greatly curtailed. After WWII interest revived and in 1960 the CCA was founded.