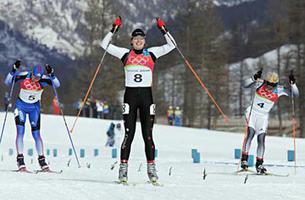 At the Torino Olympics on 22 Feb 2006 cross-country skier Chandra Crawford won Canada's second-ever medal in the event. Her win in the 1.1 km sprint during her Olympic debut and second year on the national team was unexpected by both the Canadian team as well as the long-established European teams who had historically dominated Nordic competitions (courtesy Canadian Press Images).

Chandra Crawford, cross-country skier (b at Canmore, Alta 19 November 1983). Chandra Crawford is the second North American cross-country skier to win a gold medal in OLYMPIC competition. Originally a BIATHLON competitor, Crawford began exclusively CROSS-COUNTRY SKIING at age 16. She soon became a strong competitor in elite competition, winning the World Junior Cross-Country Ski Championships in 2001 at Canmore. In 2002 she qualified for the Canadian Junior Team and participated in numerous world championships.

Crawford's international success began in 2005 when she won four world cups and two world championships in the sprint events. Still, she was not a favourite to win at Torino 2006. Her win in the 1.1 km sprint event - her Olympic debut and second year on the national team - was unexpected by both the Canadian and long-established European teams. Dominating both the quarter-final and semi-final heats prior to the day of the final, Crawford continued with similar endurance and emerged at the finish line metres ahead of Germany's Claudia Kuenzel with a time of 2 minutes, 13.2 seconds. Kuenzel ultimately won the silver medal and Russian skier Alena Sidko earned the bronze.

Crawford is one of a newly established group of elite cross-country skiers in Canada who have begun to win international medals in recent years. When asked about the future of cross-country skiing in Canada, retiring veterans Beckie SCOTT and Sara Renner both echoed "Chandra." Crawford continued to add to her medal count, winning an additional two World Cup medals in 2008 in sprint event.

In addition to training for her sport, Crawford was also instrumental in founding the organization Fast and Female, which advocates health and fitness to girls through participation in sports like cross-country skiing.