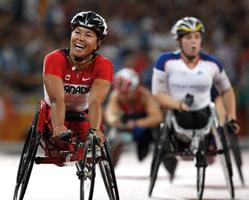 Chantal Petitclerc was the oldest of three children born to Georges, a building contractor, and Céline, a homemaker. Growing up in rural Québec, Petitclerc was active, but was not involved in any specific sport.

In 1983, at the age of 13, Petitclerc was at a friend’s farm. In an attempt to build a bike ramp, Petitclerc and her friend took a barn door off its hinges. They tried to connect the door to a crate, but in the process, the door fell on Petitclerc, breaking her spine and leaving her a paraplegic.

Chantal Petitclerc was fortunate to receive support from her school in Saint-Marc-des-Carrières. A lift was installed on her school bus, and an elevator was built in the school. Petitclerc’s home economics teacher found a sewing machine with electric hand controls for her to use. The staff made it a priority to teach other students the importance of inclusion, and Petitclerc remained embraced by her friends.

In a 2011 interview in Prospect Magazine, an Alberta sports publication, Petitclerc remarked that, “[swimming] really helped me get more fit and stronger, and helped me live a more independent life in a wheelchair.” While in the pool, Petitclerc also learned that she had a competitive drive — something she hadn’t known before her accident.

In 1987, when Chantal Petitclerc was 18 years old, she met Pierre Pomerleau, a trainer for wheelchair athletes. Pomerleau saw Petitclerc train at the François Charron Centre, a rehabilitation institute in Québec for people with physical disabilities. Pomerleau was very impressed with Petitclerc’s determination and encouraged her to give wheelchair racing a try at the training centre located at Université Laval. Petitclerc trained at both Laval and the François Charron Centre while attending the CÉGEP de Sainte-Foy in Québec City, where she received her diploma in social sciences.

The two most popular wheelchair sports at the time were racing and basketball. Petitclerc liked wheelchair racing better because she preferred individual to team competition. She was also familiar with wheelchair racing, as she had seen the wheelchair division of the Boston Marathon on television.

After three months of training, Petitclerc was almost ready to compete in her first wheelchair club competition. However, she needed a racing chair, which she couldn’t afford (a new racing chair at the time cost $4,000). With $400 from her father, she had a chair made of components from three different second-hand chairs.

Petitclerc finished in last place in her first club race. However, she had a passion for wheelchair racing and a desire to get better.

“Everyone needs to start at the base and fight their way up step-by-step,” she remarked to Prospect Magazine in 2011. “This was the case for me when I started… If you put the time and training in, you can make it happen, if you choose to.”

Although Petitclerc had no use of her legs, she could move her hips, and had full use of her abdominal muscles as well as good balance. Due to the fact that Petitclerc had good upper-body mobility, she was classified as a T53/T54 wheelchair racer, an International Paralympic Committee category assigned to athletes with the fewest upper body activity limitations.

Petitclerc was the only woman in her training group at Université Laval, but over time became one of its strongest members. In her first official race, she did not win, but was recognized as having the “best potential.” By 1988, she was on the Canadian national team.

Chantal Petitclerc represented Canada in an exhibition event at the 1990 Commonwealth Games in Auckland, New Zealand. Although she won a silver medal at the Games, it was not an entirely pleasant experience for her.

While Petitclerc and her wheelchair racing competitors were in New Zealand to represent their individual countries, they were not allowed to participate in the opening ceremonies because wheelchair racing was a demonstration sport at the Games. Moreover, during the Games themselves, wheelchair racers, including Petitclerc, were physically removed from training on the premises by officials who were concerned that their wheelchairs would damage the track. At a reception in Melbourne prior to the 2006 Commonwealth Games, Petitclerc stated, “my worst memory as an athlete was from 1990 in Auckland.”

However, one of the highlights of the Games was meeting Swedish coach Peter Eriksson, who was working at the University of Alberta at the time. By 1991, Petitclerc was working regularly with Eriksson. The two would form a lifelong friendship. Eriksson helped Petitclerc become a stronger wheelchair racer mentally, and as a result she became one of the most intimidating wheelchair racers in the world.

Chantal Petitclerc competed in her first Paralympic Games in 1992 in Barcelona and won two bronze medals — in the women’s 200m and the women’s 800m.

Heading into the 1996 Paralympic Games in Atlanta, Petitclerc was very confident. She had won the gold medal in the women’s 100m and 200m at the 1994 International Paralympic Committee World Championship in Berlin, and was ready to compete against her top rival, Cheri Becerra of the United States. At the 1996 Paralympic Games, Petitclerc beat Becerra by .04 seconds in the 100m and set a world record time of 16.70 seconds. In the 200m, Petitclerc beat Becerra by 0.23 seconds with a time of 29.41 seconds. Petitclerc also won silver medals in the women’s 400m, 800m and 1,500m.

The 2002 Commonwealth Games in Manchester were a landmark for para-sport in international competition, as they were the first fully integrated international multi-sport games. At the 2002 Games, athletes with a disability were, for the first time, considered full members of their national team; that is, the medals earned by para-athletes counted towards the total medal count for their country. This was in sharp contrast to the treatment of para-athletes at the 1990 Commonwealth Games in Auckland, New Zealand.

In December 2004, Athletics Canada named Petitclerc co-winner (with hurdler Perdita Felicien) of the Jack W. Davies Trophy (athlete of the year) and the Phil Edwards Memorial Trophy (track athlete of the year). However, Petitclerc did not accept either award because she felt that her performance had surpassed that of Felicien, who had fallen in the women’s hurdles at the 2004 Olympic Games in Athens. According to a 2004 CBC report, Petitclerc believed that the decision to share the award showed that Athletics Canada viewed Paralympians as “second-class athletes and not on the same level [as] their able-bodied brethren.”

In 2009, Chantal Petitclerc was awarded a star on Canada’s Walk of Fame in Toronto and was named a Companion of the Order of Canada. In 2010, Petitclerc was inducted into Canada’s Sports Hall of Fame; and in 2012 was awarded an Honorary Doctorate of Laws from the University of Alberta.

Petitclerc was named a coach for the United Kingdom Athletics program for the 2012 Paralympic Games in London. She was hired by her coach, Peter Eriksson, who had accepted a job as the UK Athletics head coach.

In December 2013, Petitclerc gave birth to son Elliot, her child with husband James Duhamel, a composer of electro-acoustic music. 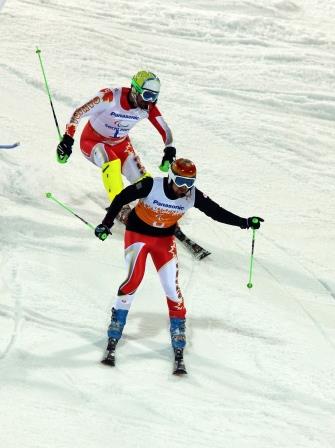