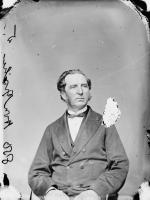 Fisher led the first responsible government in New Brunswick (1854–61) and was the leading constitutional lawyer of his day. He was a Father of Confederation, attending the Québec and London Confederation conferences, and contributed to the drafting of the British North America Act (1867) as New Brunswick’s attorney general.

Charles Fisher was the eldest son of Peter Fisher and Susanna Williams, descendants of Loyalists who settled in New Brunswick after the American Revolution. Peter Fisher, a lumber merchant, wrote the first history book published in the province, Sketches of New Brunswick, in 1825. The political undertones of Peter Fisher’s work apparently influenced his son Charles’ later policies. Peter Fisher criticized New Brunswick’s ruling elite for accumulating wealth from the colony’s resources without contributing to its political or social progress.

Charles Fisher was educated at Fredericton Collegiate School and King's College (now the University of New Brunswick). After receiving his BA, he studied law under Attorney General George Frederick Street and spent a year at the Inns of Court in London, England, becoming a barrister in 1833. During his legal studies, he developed a strong interest in constitutional law and became an outspoken advocate of self-government for New Brunswick.

In 1836, Fisher married Amelia Hatfield. They had four sons and four daughters.

Charles Fisher was elected to the Legislative Assembly as a Liberal representative for York County in 1837. The beginning of his political career coincided with the Upper and Lower Canada Rebellions (see Rebellions of 1837) and he worked toward peaceful reforms in New Brunswick. Fisher was an awkward orator and a reserved man who rarely divulged his plans to others. At the same time, he was praised for his calmness and intellect.

Fisher was a tardy convert to responsible government; he considered New Brunswickers to be "too loyal and too ignorant" to reject the ruling clique and served on the compact Council from 1848 to 1850. In 1854, he led the Opposition to power, serving as attorney general. Fisher was the head of a reform party known as the “Smashers” for its support of prohibition legislation against the wishes of the “Rummies.”

Fisher assembled one of the province's most talented groups of individuals, which included Samuel Leonard Tilley, John Mercer Johnson and William Henry Steeves. Together they implemented administrative, electoral and educational reforms, including equal rights for all religious bodies, limits on the power of the appointed Legislative Council, vote by ballot and the extension of the voting franchise.

Fisher was ousted by Tilley over a lands scandal in 1861. A Crown Land official purchased 800 acres of Crown Lands, violating the policies of his department, which led the public to accuse Fisher of negligence. Henry Pelham-Clinton, secretary of state for the colonies at the time of Fisher’s resignation, described Fisher as “the worst public man in British America.”

Charles Fisher later joined with other New Brunswick delegates, under the leadership of Samuel Tilley, at the Québec and London Conferences, where they contributed to the drafting and completion of the 72 Resolutions. He lost his seat in the Assembly when supporters of Confederation were ousted from office in the 1865 elections. He returned to public life and the Assembly in an 1866 by-election that precipitated the formation of the pro-union government led by Peter Mitchell. Fisher’s 1866 campaign was equivocal, addressing New Brunswickers both for and against Confederation. However, he became a key figure in the creation of the new nation once in office. As attorney general, Fisher was one of five New Brunswick delegates who attended the London Conference. He helped to draft the British North America Act (1867).

Elected to the House of Commons in 1867, Charles Fisher was given the honour of addressing a reply to the Speech from the Throne in the first session of Parliament. He resigned when he was appointed a judge of the New Brunswick Supreme Court on 3 October 1868. During his last decade, he was known as New Brunswick’s leading authority on constitutional law and was often called upon to judge disputes regarding federal versus provincial jurisdiction. He became a member of the senate of The University of New Brunswick and an honourary member of the New Brunswick Provincial Teachers’ Institute. He died of pneumonia at his home in Fredericton on 8 December 1880.

The British North America Act, which Fisher helped draft, shaped Canada’s political and legal framework and was little changed before the patriation of the Constitution in 1982. His son-in-law, John James Fraser, became the fifth premier (1878–82) since confederation, then the ninth lieutenant-governor (1893–96) of New Brunswick since confederation.