Viscount Monck was the first governor general of Canada. Photo taken in Montreal, Quebec, in 1868.

Monck was born into a prominent Anglo-Irish family, the eldest son of Charles Monck, 3rd Viscount Monck, and Bridget Willington. Monck’s great-grandfather received the title of viscount for his support of the Act of Union between the British and Irish parliaments in 1800. The Moncks were descended from the Norman French aristocrat Guillaume Le Moyne, who accompanied William the Conqueror to England in 1066. French Canadian newspapers later noted Monck’s distant connection to Charles Le Moyne de Longueuil, Baron de Longueuil, acting administrator of New France in 1725.

Monck received a Bachelor of Arts from Trinity College in Dublin in 1841 and became a barrister (lawyer) that same year. On 22 July 1844, Monck married his cousin, Lady Elizabeth Louise Mary Monck, the daughter of Henry Stanley Monck, 1st Earl of Rathdowne, and Frances Trench. Four of their seven children — Frances, Elizabeth, Henry and Richard — survived to adulthood. Monck succeeded his father as 4th Viscount Monck in 1849. Monck lived on his Irish estates in counties Wicklow and Wexford.

Monck was elected to the British House of Commons in July 1852. He served as lord of the treasury under Prime Minister Lord Palmerston from 1855 to 1857, when he lost his seat in the general election. Palmerston returned to power in 1859 and recommended Monck for the position of governor of British North America in 1861.

On 23 October 1861, Monck arrived in Quebec City with Lady Monck and their children. As the Quebec Mercury noted, “The new Governor had won golden opinions on all sides from his affable and dignified demeanour.” Monck and his family lived at Spencer Wood in Quebec, rebuilding the residence after a fire in 1863. Monck received an honourary Doctor of Law from Bishop’s College (now Bishop’s University) in Lennoxville, Quebec, on 1 July 1865.

Relations with the United States

Monck helped reduce tensions between British North America and the United States during the American Civil War (1861–65). His involvement was crucial in the Trent Affair in 1861 and the aftermath of the St. Albans Raid in 1864, when Confederate soldiers looted several banks in Vermont before returning to their base in Canada. Monck’s sister-in-law, Frances “Feo” Monck, who visited in 1864–65, noted in her journal on 24 October 1864 that Monck acted quickly, ordering the militia to capture the raiders, writing “The Yankee papers praise him much for his prompt conduct.” When a judge in Montreal released the raiders, many Americans were outraged. According to Feo Monck, her brother-in-law feared that this might lead to “an invasion of the Yankees” and met with John A. Macdonald, George-Étienne Cartier, William McDougall and Hector-Louis Langevin to plan their response. The raiders were rearrested for compromising British neutrality in the Civil War.

In 1868, Macdonald wrote to Nova Scotia Premier Charles Tupper, “[Monck] has managed the relations between Canada and the United States with great discretion, [when] the slightest mistake might have created a war.”

Monck disapproved of the choice of Ottawa as Canada’s capital city in 1865 and predicted that there would be a new seat of government within five years. Despite his concerns, Monck bought Rideau Hall as the residence of the governor general. He commissioned the addition of a large two-storey wing on the main residence and the construction of Rideau Cottage as a home for his secretary. Monck moved into Rideau Hall in 1866 and wrote to his son Henry, who was attending boarding school in England, “We are all agreeably surprised by this house.” 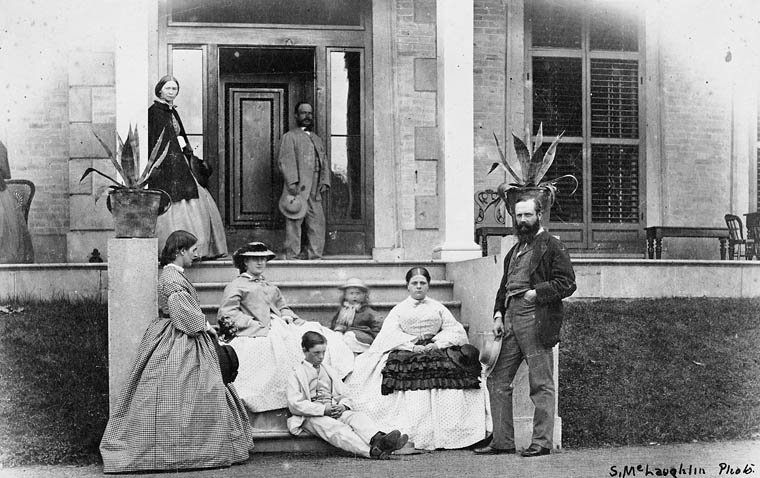 Viscount Monck and his family at Rideau Hall. Photo taken in Ottawa, Ontario, in 1866.

Monck supported Canadian Confederation and became a friend and confidante of Sir John A. Macdonald. Monck admired Macdonald as “the ablest man in the province [of Canada]” but expressed concerns over his drinking in confidential dispatches to the colonial secretary. For his part, Macdonald wrote to Tupper about Monck in 1868, “I like him amazingly and shall be very sorry when he leaves, as he has been a very prudent and efficient administrator of public affairs.”

On Macdonald’s advice, Monck invited representatives from the Maritime provinces to the Quebec Conference to meet with representatives from the united Province of Canada in October 1864. Monck wrote to Henry on 21 October 1864, “They have not finished their deliberations, but I think it very likely they will agree to advise a union of some sort.” Monck also attended the London Conference of 1866 and presented the formal request for Confederation to Queen Victoria. In February 1867, he contributed to the British parliamentary debate concerning the British North America Act (Constitution Act, 1867) in his capacity as a member of the House of Lords.

On 1 July 1867, Monck took his new oath of office as governor general of the Dominion of Canada and swore in John A. Macdonald as prime minister and the lieutenant governors. On 20 June 1868, Monck issued a proclamation, published in the Canada Gazette, calling on “all Her Majesty’s loving subjects throughout Canada to join in the due and proper celebration of the said Anniversary [of the formation of the Dominion of Canada] on the said FIRST day of JULY next.” Dominion Day (Canada Day) became an official national holiday in 1879.

Monck’s term as governor general ended on 14 November 1868, and he returned to his estates in Ireland. He was appointed Knight Grand Cross of St. Michael and St. George in June 1869 and a member of the Privy Council to recognize his achievements in Canada. Monck was lord lieutenant of County Dublin from 1874 to 1892 and died in 1894.