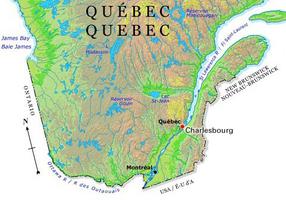 Charlesbourg, Qué, Ville, pop 70 310 (2001c), 70 942 (1996c), 70 792 (1991cA), area 66.28 km2, inc 1976, following the merger of the cities of Orsainville and Notre-Dame-des-Laurentides, the town of Charlesbourg (1949) and the municipality of Charlesbourg-Est (1928). Charlesbourg is located northeast of QUÉBEC CITY and west of the city of BEAUPORT. This residential suburb of Québec City is the fourth-largest urban centre of the Québec Urban Community. Like Beauport, it has increased by more than 20 000 people over the last 25 years, as a result of the growth in the number of Québec civil servants.

The first settlement of Charlesbourg dates back to the 1660s when the Jesuits organized the nucleus of a colony in a place known as the Trait-Carré, meaning "perpendicular." The name Charlesbourg originates from this time from a chapel built at Bourg-Royal, in honour of St Charles Borromée. The village site at the Trait-Carré had a rather characteristic triangular parcelling-out of the land radiating outwards from a central square, in the centre of which the church was located. The land allotted to every tenant would fan out from that point in an isosceles triangular shape away from the town square. In this way, the farmhouses would all be situated close to the town centre, making it easy for everyone to help out and to participate in community-oriented tasks and festivities while being in a position to defend the village against attacks.

This geographical and architectural trademark of Old Charlesbourg, recognized as an provincial historic site (1965), is well worth a visit by enthusiasts of cultural geography and architectural heritage. There are only two examples of this kind of settlement layout in all of Canada: Charlesbourg and neighbouring Beauport. Charlesbourg is rich in architectural landmarks: the church, built between 1827-33; the Jesuits' grist mill and 15 other houses dating back to the pre-1830 period; and about 40 other buildings typical of the second half of the 19th century.