Chéticamp, NS, Unincorporated Place. Chéticamp is located on the Gulf of St Lawrence, 48 km northeast of Inverness. The origin of the name is uncertain. Nicolas DENYS knew it as Chadye (1672), but the fishing station that started in 1752 was called Chéticamp. Cheticamp Island, joined by a small isthmus to the mainland, became headquarters for the Jersey merchant, Robin, whose fishing business dominated the economy after 1776. His first employees, 14 Acadian fishermen, were seasonal residents only. 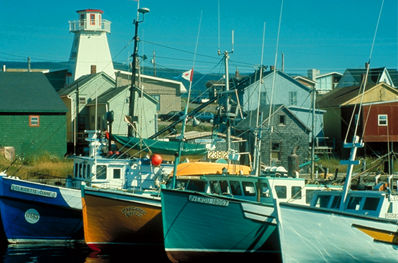 In 1782 the Bois and Richard families settled. Eight years later, 26 Acadian families were living here, and by 1820 the population was 784. Early industries included fish plants and lobster canneries, cod liver oil extraction, and mining for gold and galena. On the Cabot Trail, 4.8 km southwest of CAPE BRETON HIGHLANDS NATIONAL PARK, Chéticamp depends on fishing, farming, tourism and its longtime cottage crafts of tapestry and rug making.