Clara Benson’s parents were Thomas Moore Benson, a businessman, lawyer and judge, and Laura Abigail Fuller. They had three children, including Clara, as well as two girls from Thomas’s first marriage (his first wife passed away).

Benson began her post-secondary studies in 1885 at University College at the University of Toronto (just one year after the university began admitting female students). She majored in math, chemistry and physics, subjects considered unusual for women, and at a time when female students had no access to reading rooms or library catalogues (see also Women and Education). Despite these challenges, in 1899, Benson became the first woman to graduate with a Bachelor of Arts in chemistry from U of T. 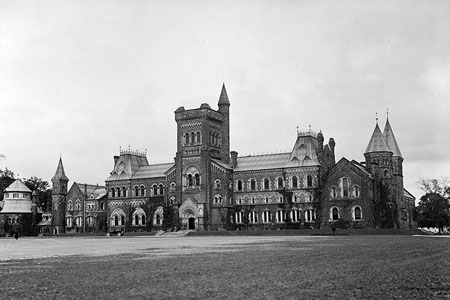 University College, University of Toronto, circa 1917.

Benson immediately went on to pursue her PhD, a degree U of T introduced in 1897. In 1903, she graduated with her doctorate in chemistry. The title of her doctoral thesis was The Rates of the Reactions in Solutions Containing Ferrous Sulphate, Potassium Iodide, and Chromic Acid. Benson, alongside Emma Baker (philosophy), were the first women to earn a PhD from the university.

Following the completion of her PhD, Benson took a job as a food science demonstrator at U of T’s Lillian Massey School of Domestic Science (see Home Economics). While she didn’t agree with the notion of a program aimed at preparing women to be housewives, there were few other job opportunities available to her. She was quickly promoted to lecturer, and in 1906 to associate professor. During the First World War, Benson discovered that the chemical properties of food and explosives could be analyzed using the same process and her methodologies were quickly adopted by munitions laboratories. In 1920, Benson and the school’s principal, Annie Laird, became U of T’s first female professors. Benson retired in 1945.

Today, the Canadian Society for Chemistry presents the annual Clara Benson Award to a woman whose work in Canada has made a distinguished contribution to the field.

Benson was actively involved in building U of T’s female athletics program, and served as president of the Women’s Athletic Association from 1921 until her retirement. The Clara Benson building, opened in 1959, was named in her honour and serves as part of the university’s athletics facilities. (See also: The History of Canadian Women in Sport; Women and Sport.)