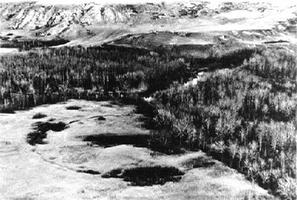 The Cluny archaeological site is located along the north bank of the Bow River in south-central Alberta. It consists of a semicircular earth trench about 1 m deep and 2 to 2.5 m wide, which, along with a natural terrace edge along one side, encloses an area that is 129 m long by 90 m wide. A pole palisade was found inside the trench. It was built parallel to the trench, at a distance that varied between 5 and 8 m. Between the trench and the palisade were 10 roughly oval pits measuring from 5 to 6.5 m in diameter, with a depth of 0.75 to 1 m.

The trench, palisade and pit structures were probably made to fortify a small native village where people lived in skin tipis. The site was apparently constructed and used around the 1740s, by a group who made a distinctive style of pottery. These people also had horses and a few European items. The evidence for horses at Cluny is the earliest we have for this area of the plains.

The village at Cluny is similar to earth lodge villages found along the Missouri River in what is now North and South Dakota. This is why archaeologists first thought that the village had perhaps been occupied by the ancestors of the historic Crow and Hidatsa, who came from this region. These peoples would have fled from their traditional territory along the Missouri River to escape the ravages of a Smallpox epidemic. They would have stayed in southern Alberta briefly before either dying out, or returning to their traditional territory.

More recent research has triggered a second hypothesis. Archaeologists have found pottery very similar to that found at Cluny at a number of other archaeological sites throughout southern Alberta and Saskatchewan, and in northern Montana. This suggests that the region was inhabited by the same or closely related peoples. Cluny and the other sites with similar pottery might represent the expansion of a group of native peoples into those areas. These were possibly the ancestors of the historic Assiniboine.

Cluny is the only site containing this distinctive pottery where a trench, palisade and pit structures have been found. Perhaps the similarity of these features to the earth lodge villages in the Dakotas is more superficial than real, however. The fortifications at Cluny could have been used to contain and protect the recently introduced and presumably very valuable horses from theft by neighbouring groups.