On 6 June 2014, author Jeremy Freeborn interviewed two-time Olympic moguls champion Alexandre Bilodeau for The Canadian Encyclopedia at the Canadian Olympic Committee’s Celebration of Excellence Parade in Calgary, which honoured the Canadian athletes who participated in the 2014 Olympic Winter Games in Sochi.

JF: I understand you initially played hockey. Was it a challenging transition for you going from hockey to freestyle skiing?

AB: Definitely. I had all my friends in hockey and I switched very early in my life. I was eight years old. It was not my choice. It was my mom’s choice. But I soon became interested in freestyle skiing because I was inspired by Jean-Luc Brassard [Brassard won an Olympic gold medal for Canada in men’s moguls at the 1994 Olympic Winter Games in Lillehammer]. It was definitely very special for me.

JF: There are many different disciplines within freestyle skiing. What do you like best about moguls?

AB: Moguls is just a complete sport. I really like it. It is an acrobatic sport. It is a strength sport and requires a lot of skill on the skiing side of things. The best freestyle skiers in the world would be gymnasts who can run like Usain Bolt and who are also very good skiers.

JF: In your opinion what is the most challenging jump you have ever executed in the sport and why?

JF: Did you feel any pressure to live up to the strong legacy that the Canadian freestyle ski team had formed prior to your arrival on the international stage (see Freestyle Skiing)?

AB: No. I think we are very strong in freestyle skiing and I think the legacy forms itself. I just needed to focus on being the best I can be and I think that’s what I did.

AB: It was great but for me I don’t see that as a title. I was fortunate with the timing. It could have been any of the 14 gold medalists.

JF: At the 2014 Olympic Winter Games in Sochi, you successfully defended your Olympic gold medal. How gratifying was it for you to be part of a podium that included Olympic silver medalist Mikael Kingsbury?

AB: It was amazing to share the podium with a fellow Canadian. He pushed me so hard the last four years and it was really great to share that moment with him.

JF: You have a very strong bond with your brother Frederic, who has cerebral palsy. How meaningful has it been for you to have him in the stands to see you win both of your Olympic gold medals?

AB: He is part of my team. He is part of my everyday life. He is my inspiration. For me to share that moment with him was the least I could do. He is the first person I want to hug when I am at the bottom. In my mind, and in my training, he is part of it. He cheers for me hard during my ups and my downs. He is very important to me.

JF: Jean-Luc Brassard, who inspired you to get into moguls, was the Canadian assistant chef de mission at the 2014 Olympic Winter Games in Sochi. How much have you learned from Brassard during your career?

AB: Jean-Luc is a tremendous inspiration to all Canadians as an athlete and as a person. I have learned a lot from him through the years.

JF: What would you tell young Canadians who have an interest in becoming freestyle skiers? 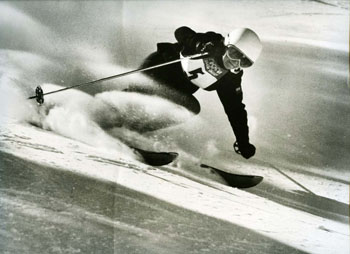 In Conversation with Anne Heggtveit