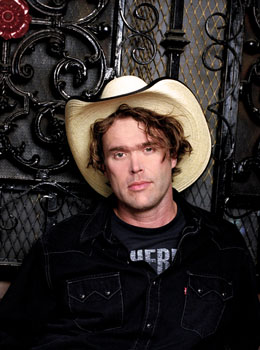 Corby Clark Marinus Lund, singer, songwriter (born 1969 in Taber, AB). Referred to as the "thinking cowboy's troubadour," Curb Lund’s off-kilter brand of alt-country blends roots music and various other styles in an engaging approach that is both innovative and traditional. He is known for his sardonic observations, rural balladry and keen eye for lyrical detail. Lund has won a Juno Award and 11 Canadian Country Music Association (CCMA) Awards, and has had three gold albums in Canada. He has recorded and toured with his band, the Hurtin’ Albertans, since 2005.

The descendant of four generations of cowboys and ranchers, Corb Lund grew up on a ranch in rural southern Alberta. Music was an important part of his early life, and he left the ranch to pursue a musical education at Grant MacEwan College in Edmonton.

Lund spent 10 years touring Canada, the US, Australia and Europe as founding member, bassist and co-songwriter of the indie rock band the Smalls. In 1995, he formed the Corb Lund Band, for which he was vocalist and lead guitarist, along with former Blue Locutus string bass player Kurt Ciesla and Nickelback drummer Ryan Vikedal. The Corb Lund Band’s debut album, Modern Pain (1995), became an indie alt-country classic, and Unforgiving Mistress followed in 1999. When the Smalls dissolved in 2001, Lund turned to his own band full-time.

Corb Lund and the Hurtin' Albertans

The Corb Lund Band recorded Five Dollar Bill (2002) for Stony Plain Records, and received a 2003 Juno Award nomination for Roots and Traditional Album of the Year. The band then morphed into Corb Lund and the Hurtin' Albertans in 2005, with Kurt Ciesla (string bass), Brady Valgardson (drums) and Grant Siemens (lead guitar, banjo, steel guitar, mandolin, dobro). The band's first release, Hair in My Eyes like a Highland Steer (2005), won a 2006 Juno Award for Roots and Traditional Album of the Year, and was certified gold in Canada for sales of more than 50,000 copies.

In 2007, the band released Horse Soldier! Horse Soldier!, a unique collection of songs from the point of view of horses ridden into war. The album's tracks progress through an intelligent and insightful reflection on war, from glamourization ("I Wanna Be in the Cavalry") to the realization of the death and tragedy of war ("My Saddle Horse Has Died"). It was nominated for a Juno Award for Roots and Traditional Album of the Year and certified gold in Canada.

In September 2009, Lund and the Hurtin’ Albertans released their first US album, Losin' Lately Gambler, for New West Records. Reflecting Lund's experience as a rodeo rider and son of a veterinarian, the album takes a witty and humorous look at ranch life with tracks such as "Horse Doctor, Come Quick" and "Talkin' Veterinarian Blues." The album garnered Lund's third Juno nomination. In 2010, the band was nominated for Emerging Artist of the Year the by the Americana Music Association.

Lund's seventh album, Cabin Fever, was released by New West Records in August 2012. It demonstrates Lund’s maturing skill as a songwriter, blending traditional country music with a glimmer of his punk background in a collection that incorporates a range of subjects (e.g., cowboy life, grave-digging, German motorcycles, Goth girls) and musical genres (e.g., blues, country-rock, Western swing and rockabilly). The album debuted at No. 1 on Billboard’s Canadian album chart and stayed in the Top 10 of the Americana chart for 13 weeks, peaking at No. 4.

Lund’s next album, Counterfeit Blues (2014), grew out of an hour-long documentary for CMT called Memphis Sun. The program chronicles the band’s trip to the legendary Sun Studio in Memphis, Tennessee, where they recorded rockabilly, rock ‘n’ roll and honky-tonk versions of songs from Five Dollar Bill and Hair in My Eyes like a Highland Steer. The 12-track album was released as a double-disc package with the CMT documentary on 17 June 2014 in Canada and on 1 July in the US. Counterfeit Blues received strong reviews in both countries, and Memphis Sun was nominated for three Canadian Screen Awards, including Best Music Program or Series.

Released by New West Records on 9 October 2015, Things that Can’t Be Undone (2015) is arguably Lund’s most stylistically diverse album to date. Produced by Grammy Award-winner Dave Cobb at his Nashville studio, the 10-track record incorporates Motown beats, Middle Eastern elements and indie rock riffs, and is more thematically serious than previous Lund albums. The lead single, “Weight of the Gun,” premiered exclusively on Rolling Stone Country, and Lund and the Albertans supported the album with an extensive North American and European tour. Rolling Stone called the album “stellar” and somewhat ironically named the veteran Lund to its 2015 list of 10 New Country Artists You Need to Know. Lund remarked wryly that he and the band have "completely given up on trying to get any kind of [US] radio play. We're too weird."

Lund has described his music as scruffy, dissident, subversive and non-toxic country. His versatile voice lends itself as easily to country twang and yodelling as to ballads or the blues. His songwriting is shaped by his personal experiences and by his musical influences, which include Ian Tyson (with whom he has collaborated), Marty Robbins, Waylon Jennings and Johnny Horton, and authors as intellectually distinctive as Gabriel García Márquez.

Lund is, above all, a storyteller. His lyrics are intelligent, thoughtful and playful, and give voice to what he knows best, namely cowboy life in Alberta. Employing regional anecdotes and references, as well as broader allusions to history and human circumstances, his lyrics have both a particular geographic centrism as well as a universal appeal. Rolling Stone once observed that Lund “makes Alberta seem like the noir version of Hank Williams's Nashville.”

Some of Lund's songs are unapologetically masculine (e.g., "Hard on Equipment" from Horse Soldier! and "Roughest Neck Around" from Five Dollar Bill), and his repertoire is refreshingly short on traditional country love songs. Although he denies being a political songwriter, many of his lyrics reveal a broad political awareness. For example, "This is My Prairie," from Losin' Lately Gambler, is a tribute to "the keeper of the family land" who stands defiant and defensive in the face of invading oil and gas companies without even "my own government's laws on my side." Recognizing that everything in life has a political aspect, Lund takes a pragmatic and pointedly observant look at a range of issues, addressing various points of views.

Roots and Traditional Album of the Year(Hair in My Eyes like a Highland Steer), Juno Awards (2006)