Crowsnest Pass, Alta, incorporated as a municipality in 2008, population 5565 (2011c), 6261 (2006c). The Municipality of Crowsnest Pass is located 269 km southwest of Calgary in the historic CROWSNEST PASS through the Rocky Mountains. The municipality takes its name from a prominent nearby mountain. The name is taken either from the Crow or from the fact that crows nested below the mountain's summit. First formed as a municipality in 1979 with the amalgamation of 5 small former mining communities Bellevue, Hillcrest, Frank, Coleman and Blairmore, in 1996 it was incorporated as a town when it absorbed the surrounding improvement district. Due to its urban rural mix, Crowsnest Pass was granted specialized municipality status in 2008.

Settlement began in the area in the 1880s with the construction of the Canadian Pacific Railway branch line through the pass. The main economic activity of the area was the mining of COAL both for the railway and other markets. A number of DISASTERS befell the area in its early years, including a massive rock slide on Turtle Mountain in 1903 which killed at least 70 people in the town of Frank (see FRANK SLIDE). In 1910 an explosion at the Bellevue Mine killed 31, and in 1914 another mine explosion at the Hillcrest Mine killed 189 miners. It remains Canada's worst mine disaster. By the 1980s the coal mines had all shut and the area was in an economic slump. The history of the area is commemorated at the Frank Slide Interpretative Centre and at numerous historic sites such as Leitch Collieries. The municipality, with its scenic mountain location, has turned to tourism as an alternative economic base. 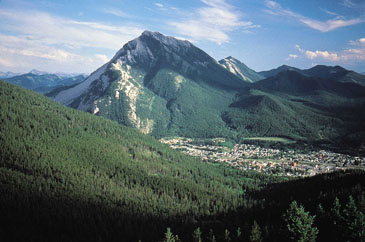 This view of Turtle Mountain, with the Frank slide on left, depicts the dense conifer forests surrounding the municipality of Crowsnest Pass (photo by Cleve Wershler, courtesy Cottonwood Consultants Ltd.).