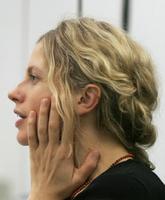 Crystal Le-Anne Pite, dancer, choreographer (b at Terrace, BC 15 Dec 1970). From an early age Crystal Pite showed an interest in and affinity for choreography, as well as striking promise as a dancer. Most emergent dancemakers of her generation work in non-balletic or hybrid forms. Pite works from a classical ballet base, one of only a few women in a form that is notably dominated by men. She remains a committed interpreter as well as a creator.

Pite received her dance training from Maureen Eastick and Wendy Green of Pacific Dance Centre in Victoria, and at summer programs at the BANFF CENTRE and the School of the Toronto Dance Theatre. She joined BALLET BRITISH COLUMBIA as a dancer in 1988 at age seventeen and had her professional choreographic debut two years later when Ballet BC performed her Between the Bliss and Me, created as part of BBC's first choreographic workshop. She danced with Ballet BC for eight years, performing in works by John ALLEYNE, Serge BENNATHAN, David EARLE, William Forsythe, Christopher HOUSE, James KUDELKA and others. During this period she was also active as a choreographer, making works for Ballet BC (Moving Day, 1996), ALBERTA BALLET (In Time of Darkness, 1993; Quest, 1995), BALLET JÖRGEN (Reflections on Billie, 1992; Shapes of a Passing, 1994; Two Dances for Jane, 1995; Hopping the Twig, 1998) and LES BALLETS JAZZ DE MONTRÉAL (Pendulum, 1995), as well as for a number of independent dance artists.

Crystal Pite joined Ballett Frankfurt in Germany as a dancer in August 1996, lured by the opportunity to work with artistic director William Forsythe in his exploration of "improvisational technology." Pite has toured widely with the company in Europe and the United States, dancing repertory works and participating in many Forsythe creations, including Sleepers Guts (1996), Small Void and Opus 31 (1997), Workwithinwork (1998), Endless House (1999) and Die Befragung des Robert Scott (2000 version). In 2000 she choreographed Excerpts from a Future Work for Ballett Frankfurt's Reflex Project. She is one of four Ballett Frankfurt dancers featured on the CD William Forsythe: Improvisation Technologies: A Tool for the Analytical Dance Eye (1999).

In 2001 Pite returned to Vancouver and continued to choreograph and to dance. Her Tales - New and Abridged, a duet that she performed with Vancouver dancer and choreographer Cori Caulfield, was produced by Ballett Frankfurt in 2001. LES BALLETS JAZZ DE MONTREAL appointed Pite resident choreographer in 2001. Her first work for the company in this capacity, Short Works: 22, premiered in Victoria, BC, in 2001.

She proclaimed Uncollected Work (2003), a two-part piece questioning the nature of inspiration, "seminal Kidd Pivot." The following year, she examined two sides of the same story with the witty Double Story, a program shared with Richard Siegal. His choreography was shown first, followed by Pite's, which inverted her collaborator's straightforward contribution with a hilarious, almost subversive wallop. By this time, her commitment to reinventing storytelling in movement had become a new direction.

Lost Action (2006) suggested an interest in dark aspects of life with an exploration of dissolution - the inevitable disappearance of dance, which is by nature ephemeral. Dark Matters (2009), her first two-hour piece, traced the impact of unseen forces on mind and body. By 2010 Pite had made another evening-long work, The You Show, about conflict in human relationships. In it she invited viewers to recognize themselves in her movements and connect with their own histories and their own bodies.

In 2010, Pite, who had kept in close contact with Frankfurt, began to split her time between Vancouver and the German city. Kidd Pivot was appointed resident company for three years at the Kunstlerhaus Mousonturm. Known as Kidd Pivot Frankfurt RM, the company of eight regular dancers, including Pite, spent two or three months a year working out of Frankfurt. The rest of the time their base was Vancouver.

As it became one of Canada's most sought-after companies, Kidd Pivot's touring pace increased; in 2010 it gave 75 performances in 22 cities in seven countries. That year Pite collaborated with filmmakers Marlene Millar and Philip Szporer in Lost Action, Trace, a 3D adaptation of her stage piece Lost Action.

Pite's credits include three films: A Hollow Place, a five-minute short for Bravo directed by Dan Sadler, which she choreographed and danced; the New Line Cinema feature film One Night Stand, directed by Mike Figgis, in which she is billed as a choreographer but also dances and improvises; and a 2001 dance short by Daniel Conrad for the CBC, in which she performs her own dances.

Crystal Pite's dance-making has been received with acclaim and respect by audiences and critics. The 2004 Bonnie Bird North American Choreographic Award was followed in 2005 by the Isadora Award. The Rio Tinto Alcan Performing Arts Award and the Jessie Richardson Theatre Award arrived in 2006. In 2008 Pite was chosen for the Governor General of Canada's Performing Arts mentorship program, and the following year she won four Dora Mavor Moore awards. In 2011, the Jacob's Pillow Award came with a cheque of $25 000.