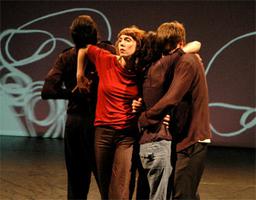 Danièle Desnoyers, contemporary dancer and choreographer (b at Montréal 6 Nov 1960). Danièle Desnoyers stands as a singular figure within the dance milieu that flourished in Québec in the 1980s and 1990s, and which is often referred to as "nouvelle danse québécoise." Eschewing the psycho-dramatic tendencies of her choreographic peers in Québec, she has delved into the kinetic landscape of pure movement. Her dances are sparse and poetic works whose evocative power has gained her an international reputation. The gestural style is marked by its sophistication and complexity, abrupt dynamic changes and attention to intricate detail. Lush and striking costumes, sculptural lights and sets - conceived by herself along with artistic collaborators - are vital components of her unique choreographic language.

Desnoyers studied classical BALLET for a decade from the age of 6, and earned a degree in dance interpretation from the University of Québec in 1989, at the same time dancing professionally in productions of choreographer Jean-Pierre PERREAULT. She created her first dances in 1984 as a member of a choreographers' collective, and established her own dance company, Le Carré des Lombes, in 1989. Since her auspicious performances in Montréal's Festival international de nouvelle danse in 1992, she has received numerous commissions, offers of creation residencies, and international touring opportunities in North America, Asia and Europe. With Concerto grosso pour corps et surface métallique she won the prix d'auteur at the Rencontres choréographiques internationales 2000 of the Conseil général de la Seine-Saint-Denis in France.

Desnoyers generated a vibrant body of 9 "choreographic poems" between 1986 and 2002, all informed by careful research into the sources of her themes: a duet (and later quintet) study Des héros désaffectés, in collaboration with scenographer Marc-André Coulombe, (1986); Rouges-Gorges (1989), which distilled a foreboding essence of Margaret Atwood's futuristic novel The Handmaid's Tale; Les Bois dormants (1991), inspired by South American literature; Mirador-Mi-clos (1990), drawn from writing about artists' muses; the Ex-Voto (1992) collage of images emerging from painter Frida Kahlo's life and work; Du souffle de sa tourmente, j'ai vu (1994), a spacious and pure dance ode for 5 female dancers; Discordantia (1997), a sextet that interweaves movement into the dense and tormented music of Russian composer Sofia Gubaidulina; Concerto grosso pour corps et surface métallique (1999), which playfully explores the musicality of movement through an electroacoustic enhancement of the 5 dancers' slithery footfalls on a metal stage; and Bataille (2002), a ghostly "landscape of the memory" for 6 dancers inspired by an installation created in an old Berlin spa.

In 2003 Danièle Desnoyers began a new phase in her work, turning her attention to formal issues, explorations and collaborations with sound and visual artists: Duos pour corps et instruments (2003), an abstract and body-centred series of solos, duets and trio "encounters" and manipulations of sound devices designed by Nancy Tobin; a quintet with live pianist, Play It Again (2004-05), with a sound installation by Jean-François Laporte; and Là où je vis (2008), rooted in the 5 dancers' identities in interaction with a visual onstage performance by media artist Manon de Pauw.