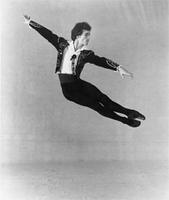 David Peregrine (stage name), dancer; born David Alan Evans (at Ottawa, 19 Sept 1954; d Alaska, probably 7 June 1989). After initial training in BALLET at the Nesta Toumine School in Ottawa, David Peregrine studied under David MORONI and others at the ROYAL WINNIPEG BALLET School professional division and the Banff School of Fine Arts (now BANFF CENTRE FOR CONTINUING EDUCATION), as well as in Europe on a study tour financed by a senior arts grant from the CANADA COUNCIL.

He made his professional debut with the Royal Winnipeg Ballet corps de ballet in 1975, was promoted to soloist in 1978 and became principal in 1980. That year he received bronze medals at both the World Ballet Concours in Japan and the International Ballet Competition in Varna, Bulgaria, on both occasions partnering RWB principal Evelyn HART, another product of the RWB school. As well as heading the RWB company at home and on international tours, Peregrine performed as a guest artist with companies throughout Europe and North America, and, along with Hart, his longtime dancing partner, at galas in Canada, the US, England, South America, Holland and Japan.

A noble, unmannered dancer, he was able to bring conviction to a broad range of roles, ranging from the classics (Romeo in Romeo and Juliet, the Prince in Swan Lake, Albrecht in Giselle) to modern ballets by choreographers such as Maurice Béjart, Rudi van Danzig and Hans van Manen. He and Hart became identified internationally with Belong, a fluid and emotion-driven pas de deux by Norbert VESAK. He was made an Officer of the Order of Canada in 1986.

Peregrine appeared in a number of TV films, among them Romeo and Juliet, and in 1982 made his professional acting debut as Smike in the MANITOBA THEATRE CENTRE production of Nicholas Nickleby. It was his eagerness to explore avenues outside dance that led, indirectly, to his death. Acting fascinated him - it enlarged the scope of the things he could do on the stage - and in 1989 he returned to the MTC, playing the monster in Frankenstein. The production was set in the Arctic, and he was so moved by the experience of the play that on 7 June 1989 he flew from Fairbanks, Alaska, to explore the region for himself. His light aircraft crashed 100 miles south of Fairbanks on the north slope of the Alaskan range; its emergency locator signal was picked up by satellite 5 days later, but bad weather prevented rescue crews from reaching the site until 15 June. Peregrine, his brother and a friend from Kentucky were all killed in the accident.