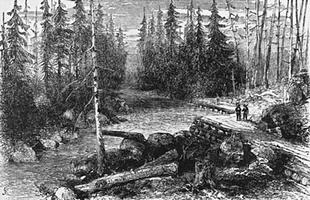 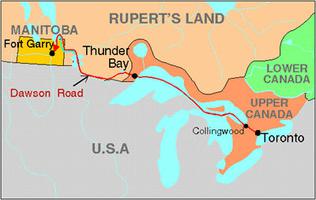 PreviousNext
Dawson Road, a trail running from the northwest corner of LAKE OF THE WOODS to Fort Garry [Winnipeg], a distance of about 120 km, was the western end of the "Dawson Route," an all-Canadian route from Thunder Bay to the Red River district of southern Manitoba. Part land and part water, the route required a month of travel, and 70 loadings and unloadings of freight and baggage. It was surveyed in 1858 by S.J. DAWSON for the Canadian government, and work on it was begun in 1868 as a make-work project after a crop failure in Red River. Before it was completed, the RED RIVER EXPEDITION of 1870 used the road on its way to suppress the Red River Rebellion of that year. In 1873, 1600 travellers used it, but most preferred the faster and easier route via Duluth and the Red River steamers to Winnipeg. The road fell into disuse except for local traffic after the CPR was finished in 1885.
×