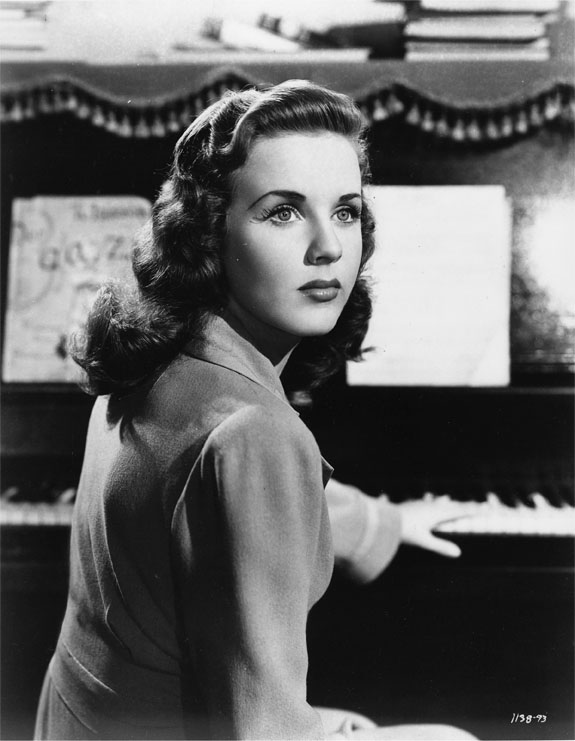 Deanna Durbin, born Edna Mae Durbin, actress, singer (born at Winnipeg 4 Dec 1921, died April 2013). Deanna Durbin was born in Winnipeg to English immigrant parents, but was raised from infancy in California. She was blessed with a strong and surprisingly mature voice. Headed for a career in opera, she became, instead, an instant singing star of global proportions at 14 years old with appearances on the popular Eddy Cantor radio show, and her first feature Three Smart Girls, which was so successful it rescued Universal Studios from the brink of bankruptcy in 1936. Originally she had been signed to MGM, the studio that was grooming Judy Garland for stardom, but studio boss Louis B. Mayer didn't see the need to keep young female singers on his payroll. When Durbin was released - it's part of Hollywood legend that it was Mayer's intention to let Garland go, but there was an internal mix-up with his memo - Universal was quick to put her under contract. It was here that she was given Deanna Durbin as a professional name.

With her next 3 films - 100 Men and a Girl in 1937, Mad about Music and That Certain Age, both in 1938 - Deanna Durbin's stardom rivalled that of Shirley Temple, who was the biggest box-office draw at the time. In 1939 Durbin shared an Honorary Oscar with Mickey Rooney "for bringing to the screen the spirit and personification of youth." She modulated smoothly from bouncy innocence and sweetness to more glamorous maturity. Then, after just 21 films and a dozen years in the limelight, she retired to the south of France, her last movie, For the Love of Mary, released in 1948. She has rebuffed numerous attempts to bring her out of retirement but there are still Deanna Durbin fan clubs worldwide.