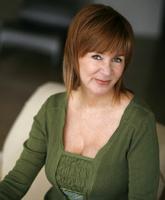 Debra McGrath is an actor and writer with bold and original ideas (photo courtesy of Pierre Gautreau Photography).

Debra Anne McGrath, actor, comedian, writer, director (born at Toronto 5 July 1954). Deb McGrath began performing at Sir John A. Macdonald High School in musicals, plays and variety shows. She graduated from the theatre program at Ryerson in 1977. Toronto's Second City comedy group welcomed her in 1983 as both writer and actor, and she became adept at creating roles and productions that utilized her own strengths and those of her fellow actors.

In 1990 she took her considerable experience to the much less sure-footed world of Hollywood, where she created and co-wrote, along with Linda Kash, a television series called My Talk Show for Ron Howard's Imagine Entertainment. A typically self- conscious Canadian interpretation of the American television industry, the short-lived show successfully established McGrath as an actor and writer with bold and original ideas. McGrath went on to an ambitious career in Canada with numerous roles in drama, comedy and children's series including Street Legal, Due South, Termini Station and Wind at My Back. She also appeared in 2003 with Julie Andrews in the television movies Eloise at the Plaza and Eloise at Christmastime, and played Shirley Armstrong in 55 episodes of Paradise Falls from 2001-04.

While Deb McGrath created original and smart television and film roles, her experience as an improvisational actor was also noticed. In 2002 she played the lead in the Canadian feature film Expecting, a delightfully profane, completely improvised comedy about a woman's unplanned pregnancy. The role earned her an ACTRA Award nomination and a Canadian Comedy Award. In late 2004, McGrath formed (along with Kathryn Greenwood, Robin Duke, Jayne Eastwood, and Teresa Pavlinek) a comedy troupe called Women Fully Clothed, which she performed with for several years.

McGrath gave scripted television another try when along with her husband, Colin Mochrie, she co-wrote Getting Along Famously (2006), a series for the CBC. It was for another CBC comedy series, however, that she gained international recognition. In Little Mosque on the Prairie, about the Muslim inhabitants of a fictional Saskatchewan town, McGrath plays the self-absorbed Mayor Ann Popowicz. The series Single White Spenny began filming in 2010; Deb McGrath starred as the mother of Spencer Rice. In 2011 she and Mochrie filmed the short Standing on Richards for Bravo Fact. She appeared as Mrs Pepperleigh in Sunshine Sketches of a Small Town, a made-for-television movie based on the stories of Canadian humorist Stephen Leacock.