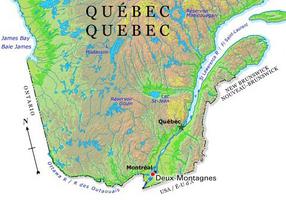 Deux-Montagnes, Qué, City, pop 17 402 (2006c), 17 080 (2001c), inc 1982. Deux-Montagnes is located at the northeast end of Lac-des-Deux-Montagnes, about 30 km northwest of MONTRÉAL. First known as Saint-Eustache-sur-le-Lac (1921), it changed its name to Deux-Montagnes in 1963. The name Deux-Montagnes, which dates back to 1674, first appeared on Jean-Baptiste-Louis FRANQUELIN's 1684 map. It was given to the lake that stands in front of Deux-Montagnes, and to the seigneury which stretched northwards from the shore of the lake. The name's origin is uncertain, but it likely refers to the 2 highest summits of Mont Oka, or the fact that Mont Oka to the north and Mont Rigaud to the south, when seen from afar appear to be flanking the lake.

The area was first developed for summer cottages. Later, its proximity to Montréal turned this locality into a residential suburb. Tourism and agriculture, once the mainstays of the local economy, have almost disappeared. Today close to 25% of the population is English-speaking, and as a result there are institutions (educational and religious) to accommodate these residents. Since 1991 Deux-Montagnes has shared municipal services with its neighbour, Sainte-Marthe-sur-le-Lac. The International Soccer Tournament is held in Deux-Montagnes each September.