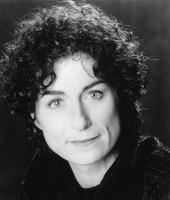 Michelle Renee Diane D'Aquila, actor (b at Cedar Rapids, Iowa 23 Oct 1952). Diane D'Aquila, distinguished by her low, dusky voice and powerful stage presence, commands a wide range of acting styles from the highly naturalistic to the highly stylized. She is renowned for her portrayal of strong women.

Bitten early by the acting bug, D'Aquila worked as a dresser at the Guthrie Theatre in Minneapolis while in high school. Encouraged by the Canadian actors she met there, including Douglas CAMPBELL (the Guthrie's artistic director from 1966-71), she applied over her father's objections to the NATIONAL THEATRE SCHOOL OF CANADA in 1969 and was accepted. Her first job upon graduation in 1972 was as Elise in Jean-Louis Roux's production of Molière's The Miser at the NEPTUNE THEATRE, which she followed up with experimental work in Toronto with Martin Kinch. Among major roles she created in Canada was Masha in the 1981 world premiere of Tennessee Williams' A Notebook of Trigorin at the VANCOUVER PLAYHOUSE, directed by Roger Hodgman. She was Titania/Hippolyta in the inaugural Dream in High Park (1983) for Guy Sprung. She created roles in 3 plays by George F. WALKER - Matilda in Zastrozzi (1979) at Toronto Free Theatre, Karla in The Art of War (1983) for FACTORY THEATRE LAB and Anna in Nothing Sacred (1988) for CentreStage.

In the mid 1980s Diane D'Aquila worked with some of the most prominent US directors at the American Repertory Theater (A.R.T.) in Cambridge, Mass. There she created the role of Angela in Andrei Serban and Julie Taymor's production of Carlo Gozzi's The King Stag (1984), which became the company's signature piece. There, too, she played Beatrice/Joanna in The Changeling (1985) for Robert Brustein, the title role in Alcestis (1986) for Robert Wilson, and Carmen in The Balcony (1986) for Joanne Akalaitis; she created the role of Charlene in Hot 'n' Throbbing (1994) for Anne Bogart.

Since 1994 she has been associated with the STRATFORD FESTIVAL. There some of her favourite roles have been Paulina in A Winter's Tale (1998) for Brian Bedford, Elizabeth I in Elizabeth Rex (2000) directed for the stage by Martha HENRY, Cleopatra in Antony and Cleopatra (2003) also for Henry, and the role of the Scarecrow in all 3 parts of Peter Hinton's trilogy The Swanne (2002-04). She played the title role in Christopher Marlowe's Dido, Queen of Carthage (2005) at the A.R.T. for Neil Barrett, and Lady Macbeth (2008) at the NATIONAL ARTS CENTRE for Peter Hinton. In Shaw's Caesar and Cleopatra (2008), starring Christopher PLUMMER and directed by Des McAnuff for the Stratford Festival, she played Ftatateeta.

D'Aquila has been seen in Canadian television series such as Slings and Arrows, This is Wonderland, Traders and Street Legal. She played politician and feminist Agnes MACPHAIL in the Historica Minute about MacPhail's influence on prison reform in Canada.

In 2004 Diane D'Aquila won an ACTRA AWARD and a GEMINI AWARD for best actress for the RHOMBUS MEDIA film Elizabeth Rex (2003). In 2007 she was nominated for a Dora Award for her performance as Mary in SOULPEPPER THEATRE's revival of David FRENCH's Leaving Home.

Even when playing principal characters, D'Aquila views herself as part of an ensemble. She has said that her biggest concern is "to serve the playwright and to tell the story." Playwright Michael HOLLINGSWORTH has called D'Aquila "one of those actresses who was willing to push the thresholds, no matter what she's doing. She's still doing it now. She's not scared to take chances."