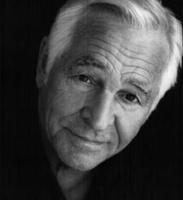 Award-winning actor Donnelly Rhodes has had a distinguished in career both in Canada and in the US (courtesy Kevin Clark Photography).

Donnelly Rhodes, né Donnelly Henry, actor (born 4 December 1937 in Winnipeg, MB; died 8 January 2018 in Maple Ridge, BC). Donnelly Rhodes is the son of Manitoba playwright Ann Henry. He got his first taste of theatre while serving in the Royal Canadian Air Force as a mechanic. After leaving the RCAF, he studied at the MANITOBA THEATRE CENTRE under John HIRSCH, who encouraged him to enroll in the NATIONAL THEATRE SCHOOL, which had just opened in Montréal.

Rhodes toured the country with the National Theatre and moved on to the STRATFORD FESTIVAL stage in 1963. Following appearances in early CBC-TV productions, he was picked up as a contract player for Universal Pictures in Hollywood. He landed both film roles, including a small part as a gunslinger in Butch Cassidy and the Sundance Kid (1969), and television roles ranging from Wagon Train to Dr. Kildare to Mission Impossible. He returned to Canada in the early 1970s to appear in the disappointing The Neptune Factor (1973) with fellow Canadian Walter Pigeon. He had a part in the low-budget gem, The Hard Part Begins (1974), about a country singer (Rhodes) who travels the small-town circuit in southern Ontario with his band but dreams of Nashville. Acting as one of English-Canadian cinema's quintessential dreamers (or losers as some would have it), Rhodes gave a stellar performance, conveying perfectly the dreariness of life on the road with a second-rate bar band.

In 1973 Rhodes joined the cast of the American soap opera The Young and the Restless for the 1974-75 season, before returning to Canada for a role in the CBC crime drama Sidestreets (1976-78). He has been travelling back and forth ever since, appearing in numerous television shows, series and made-for-television movies. Major roles include Dutch on the satirical Soap (1978-81), Dr. Grant Roberts on the popular series Danger Bay (1985-90), and Detective Leo Shannon in Da Vinci's Inquest (1998-2005). Rhodes won a GEMINI Award in 2002 for that role, and was nominated two previous years. He also had a recurring part in CBC's drama Street Legal (1991-92), and in Battlestar Galactica (2004-09) as Dr. Cottle.