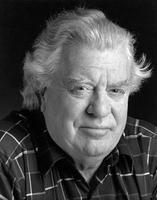 Douglas Campbell, actor, director, artistic director (b at Glasgow, Scotland 11 June 1922, d at Montréal 6 Oct 2009). Douglas Campbell was brought to Canada by acting, but was also a successful director and artistic director both here and on the international stage. In 1953 he was one of the original ensemble members of the STRATFORD FESTIVAL in Stratford, Ontario, and he went on to work with the festival for more than 4 decades. A skilled character actor with a deep, stentorian voice, he often played robustly comic characters but was also praised for hitting subtle emotional notes and took on dramatic roles such as King Lear and Othello.

While married to Ann Casson (daughter of British theatre greats Dame Sybil Thorndike and Sir Lewis Casson), Douglas Campbell was introduced to director and mentor Sir Tyrone GUTHRIE and the Old Vic Theatre in London, England. Campbell debuted there in 1941. It was Guthrie who recruited him to come to Canada; Guthrie and Tom PATTERSON were putting together a festival dedicated to Shakespeare's plays and wanted Campbell - along with Michael Bates, Irene Worth and Alec Guinness - to join the otherwise Canadian troupe. Regulars in the Stratford Festival audience may have thought of Campbell as the quintessential Falstaff; he played and reprised the character many times between 1956 and 2001, in Henry IV parts 1 and 2 and in 6 different productions of The Merry Wives of Windsor. He drew acclaim for dramatic roles in Oedipus Rex (1954) and as Claudius in Hamlet (1957), in the title role in Othello (1959), as Shakespeare's Henry VIII (1961) and as William Blake in Elliott Hayes' Blake (1982, 1983). Among comic roles he was highly acclaimed for his Orgon in Molière's Tartuffe (1983).

In 1954, Campbell and Patterson founded The Canadian Players, a touring company for Stratford actors during the festival's off-season. When the Stratford Festival later extended its season to the winter months, The Canadian Players moved to Toronto, finally disbanding in 1966. That year Campbell acted as artistic director of the Guthrie Theater in Minneapolis, Minnesota.

Stravinsky's A Soldier's Tale (1955) was Campbell's premiere as a director. Also at the Stratford Festival, he earned praise for his direction of Julius Caesar (1965, 1998), The Country Wife (1995) and a recreation of Guthrie's Oedipus (1997), with his son Benedict Campbell in the lead. While Douglas Campbell did direct select movie and television productions (The Great Detective, Anne of Green Gables: The Continuing Story), the theatre stage had an almost unbroken monopoly on his talents.

Douglas Campbell was awarded the ORDER OF CANADA in 1997 and the GOVERNOR GENERAL'S PERFORMING ARTS AWARD for Lifetime Artistic Achievement in 2003. Under the umbrella of the annual Tyrone Guthrie Awards, the Stratford Festival established the Douglas Campbell Award to support its recipient in theatrical creation. In his honour The Bard on the Beach Shakespeare Festival in Vancouver named one of its spaces The Douglas Campbell Studio Stage.

Already well established as a classical actor in Britain when he came to Canada in the early 1950s, Douglas Campbell found very little theatre of Canadian origin and in fact very little professional theatre in the country at all. His efforts on and off stage helped to lay the foundations upon which some of the largest theatrical establishments across the country continue to build.