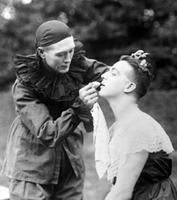 One of several Canadian Army concert parties in France during WWI, the original Dumbells were drawn from the 3rd Division by Merton W. Plunkett at Ferfay, France, in 1917 and included Jack Ayre (pianist and musical director), Elmer A. Belding, Ted Charters, and Allan Murray. Taking their name from the 3rd Division's insignia, a red dumbell, the group entertained front-line soldiers with popular songs and collectively conceived skits about army life. In the summer of 1918, after recruiting Ben Allan from the 16th Battalion's Party, "Red" Newman and Charlie MacLean from the Y-Emmas, and Ross "Marjorie" Hamilton from the Maple Leaf Concert Party, Plunkett brought the Dumbells to London where they performed at the YMCA's Beaver Hut, the Victoria Palace, and the Coliseum before returning to France. Amalgamating with other top army performers in 1918-19, the Dumbells became the elite Canadian concert party in Europe and are remembered for their unique army version of Gilbert and Sullivan's H.M.S. Pinafore.

The Depression killed touring and ended the theatrical careers of the Dumbells. Nevertheless, the reputation the group earned during the war and on their professional tours earned them a special place in Canada's memory and in 1977 The Legend of the Dumbells was devised and staged by Alan Lund at the Charlottetown Festival.