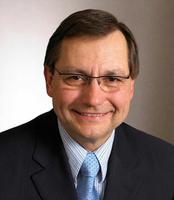 Premier of Alberta, 2006 to 2011 (courtesy Office of the Premier, Government of Alberta).

Edward Michael Stelmach, businessman, farmer, politician, premier of Alberta (born at Lamont, Alta, 11 May 1951). Edward Stelmach grew up on the family farm near Andrew, Alberta. After attending the UNIVERSITY OF ALBERTA, Stelmach returned to work the farm and raise his family. He became known in local politics as a member of County Council, where he also served for a time as reeve. Stelmach also served as a school trustee and chair of the Vegreville Health Unit board during that time.

Edward Stelmach was first elected to the Alberta legislature under the Conservative banner in the 1993 provincial election. He subsequently held various government posts, including those of Deputy Whip and Chief Government Whip, before entering the Cabinet in 1997. In Cabinet, Stelmach served as Minister of Agriculture, Food and Rural Development, Minister of Infrastructure, Minister of Transportation, and Minister of Intergovernmental Relations.

Regarded as hardworking and competent, if uncharismatic, Stelmach surprised some when he announced in the spring of 2006 his intention to enter the Conservative leadership race to replace Ralph KLEIN, who had announced earlier that spring that he was stepping down as premier. At the time, several other sitting Cabinet ministers and MLAs, as well as a former high profile Cabinet minister, Jim Dinning, were viewed as front-runners for the position. During the first round of the Conservative leadership vote held in November 2006, however, Stelmach finished third behind sitting MLA Ted Morton and Dinning. The run-off vote was held a week later on 2 December 2006. Under the preferential vote system used to determine a winner, Stelmach received a total of 77 577 votes compared with second-place finisher Jim Dinning's overall total of 51 282, making Stelmach leader of the Alberta Conservative Party and premier of the province.

Premier Stelmach immediately attempted to put his own stamp on the government, shrinking the Cabinet from 24 posts to 18. During his leadership run, Stelmach had also promised the policies of a government led by him would be different from those of his predecessor. In particular, he declared his intention to examine Alberta's low royalty rate on oil and gas, improve government accountability, and ensure sufficient investments were made in Alberta's health and education systems.

Stelmach's first year of office was controversial as some critics charged he was favouring rural ridings over the cities, especially Calgary, which demanded steep increases in funding to deal with the impacts of Alberta's oil boom. Even more controversial was Stelmach's creation of Alberta's Royalty Review Panel to examine Alberta's oil royalties. The panel's subsequent report, in September 2007, recommended an increase in the government rate. This recommendation was attacked immediately by the industry as too aggressive, but by others as too timid. In the end, Stelmach's government chose to adopt a rate less than recommended by the panel and phased in over a longer period of time.

In February 2008, the Stelmach government called an election. There was considerable uncertainty leading up to election night as to the outcome, with many pundits viewing the Conservative party as vulnerable. Instead, when the ballots were counted on March 3rd, Stelmach's Tories had won another resounding victory - the eleventh in a row - taking 72 of 83 seats, and 53 percent of the vote, leaving the opposition parties wondering what had gone wrong.

The celebratory mood around Stelmach's victory soon changed, however. Alberta was not immune to the recession impacting the world economy. Over the next two years, the government ran successive budgetary deficits, resulting in the opening up of divisions between the party's fiscal hawks, led by Finance Minister Ted Morton, and its Red Tory faction.

Stelmach faced additional challenges from the growing right-wing Wildrose Alliance Party and its leader, Danielle Smith. Polls taken during the first two years after the election showed the Tory party often running neck-and-neck with the right-wing libertarian challenger. Stelmach's difficulties were compounded by what many viewed as his inability to articulate a clear vision for the province.

Things came to a head in early 2011 when Stelmach announced publicly that Alberta would not be returning to a surplus until 2012-13, a stance opposed by many within the party. Facing a Cabinet revolt, led by Finance Minister Morton who himself threatened resignation, Stelmach surprised everyone by abruptly announcing on 25 January 2011 that he would not be running in the next election and would only stay on as premier until a new leader was chosen by the party.

Stelmach's tenure as premier ended in early October 2011 when Alison REDFORD was elected leader of Alberta's Progressive Conservative Party and premier of the province.