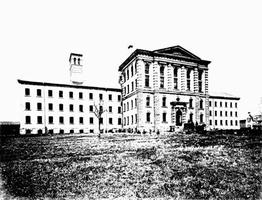 Edwin Alonzo Boyd, bank robber (born at Toronto 2 Apr 1914; died 17 May 2002). The son of a Toronto policeman, Boyd hoboed across the country as a youth and had minor scrapes with the law during the GREAT DEPRESSION of the 1930s. He served with the Canadian Army during the SECOND WORLD WAR but, failing to find adequate employment in the postwar years, he turned to crime.

Operating at first as a lone bandit, then later with a gang, Boyd committed several daring bank robberies in the late 1940s and early 1950s, most of them in the Toronto area. Boyd, Willie Jackson, Lenny Jackson and Steve Suchan (born Valent Lesso) were dubbed The Boyd Gang by the media who sensationalized their crimes. Boyd's holdups and two spectacular escapes from the Don Jail brought him notoriety. In 1952, a Royal Commission was established to review the circumstances of the Gang's prison escapes.

On 6 March 1952, two members of the Boyd Gang, Steve Suchan and Leonard Jackson, killed Detective Edmund Tong, a Toronto police detective, and were later hanged for the murder. Boyd was not involved in the homicide, but for his robberies and jail breaks he was sentenced on 16 October 1952 to life imprisonment. He was first released in 1962 but because of parole violations he was returned to prison for four more years and was released again in 1966. He retired to private life under a new identity.

In 1998 CBC produced a documentary about Boyd's life, and in 2011 Canadian actor Scott Speedman played Boyd in the film Edwin Boyd: Citizen Gangster.