Electric Cars to be Marketed

This article was originally published in Maclean’s magazine on July 29, 1996. Partner content is not updated. 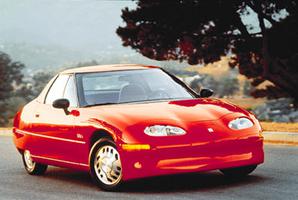 The Impact is a compact electric vehicle, one of a host of battery-powered cars scheduled to go on sale over the next feew years (courtesy Maclean's).

Electric Cars to be Marketed

The sleek two-seater that Mary O'Callaghan took for a test-drive in a hotel parking lot near Vancouver airport last April was much like any new car. The vehicle had power brakes, air conditioning and a CD player, but there was one big difference: it was powered solely by electricity. "The most interesting thing is that it looks very much like a normal car," says O'Callaghan, a customer service representative with B.C. Hydro. "Except it is so quiet. That's the big surprise."

O'Callaghan was one of the first people in Canada to drive the Impact, a compact electric vehicle (known as an EV) that will soon be the subject of a joint research project by General Motors Corp., B.C. Hydro and the British Columbia government. GM, the world's biggest automaker, has spent more than $500 million so far on the vehicle, one of a host of battery-powered cars that are scheduled to go on sale over the next few years in selected areas of North America. Starting next week, 20 drivers in the Vancouver area will have a chance to use GM's electric car for two weeks at a stretch, part of a series of North American tests to see how electric cars perform in the real world. "You not only have the opportunity to drive a vehicle that is environmentally friendly but also is leading edge technologically," says Santo Giardina, a spokesman for General Motors of Canada Ltd. "We are going to find out what EVs hold for this area and maybe the rest of Canada."

Although the sight of GM's battery-powered vehicles wheeling around Vancouver is sure to attract attention, it will be many years before Canadian consumers are buying electric cars in any significant numbers. For one thing, they are not cheap: when a modified version of the Impact goes on sale in California this fall, it will cost $47,300 - and even at that price, the company will likely lose money. Moreover, battery-powered cars generally need recharging every 120 km or less. In cold weather, the maximum range is even lower.

For the auto industry, however, those problems are outweighed by another consideration. In March, California legislators approved a new pollution-control law that requires that electric cars account for 10 per cent of all new cars sold in the state by the year 2003. As a result, says Robert T. Hayden, executive director of the Electric Vehicle Association of the Americas, "Electric vehicles are on their way to the showrooms of the world's largest car companies." And despite the commercial problems, Hayden predicts that electric cars will become more popular as "vehicle and battery technology improve, recharging and servicing infrastructure is put in place and cost of production decreases."

Last week, Ford Motor Co. claimed to have become the first major North American automaker this century to sell an electric vehicle. The breakthrough deal involved the sale of 15 modified Ford Ranger pickup trucks to municipal authorities in Santa Clara County, Calif. The $45,800 vehicles have a top speed of 115 km/h and a range of 100 km. In April, American Honda Motor Co. Inc. announced plans to lease its Honda EV to commercial fleets and consumers in California beginning in spring of 1997. Described by one early test-driver as a "Honda Civic on steroids," the four-seat, front-wheel drive car is powered by 1,000 lb. of nickel-metal hydride batteries, which must be replaced every four years. Meanwhile, Nissan Motor Co. Ltd. has announced a limited lease/sale program next spring in Japan for its Prairie Joy EV - a four-seat vehicle that will arrive in North America by 1998. And earlier this month Montreal-based Bombardier Inc. unveiled a prototype of a small, two-person runabout that may go into production next year. Not intended for highway use, the so-called Neighborhood Electric Vehicle is primarily aimed at retirement communities in the U.S. south.

GM's choice of the B.C. lower mainland for its only Canadian EV test is not surprising. Last December, the B.C. government announced the toughest automobile emission standards in the country. Starting in 2001, all new cars sold in the province will have to meet California emission requirements. The province is also planning to set targets for the proportion of zero-emission vehicles sold in the province. "The problem of air quality is of a great concern here, especially in the lower mainland," says Dennis Regoza, manager of the clean vehicles and fuels program for British Columbia's environment ministry. "I don't see that kind of groundswell on air quality in other places, like Ontario."

The trial program is scheduled to begin on July 29 and will run until November. In preparation, B.C. Hydro will install special 220-volt charging systems in the homes of the 20 drivers taking part in the study. Each will be asked to keep a detailed diary on the car's handling, convenience and use under a variety of geographic and weather conditions. "It's an education for us and it's an education for the public as well," says GM's Giardina.

Already, some environmentalists are questioning how successful electric cars will be in curbing pollution. They point out that the cars, if widely used, would greatly increase demand for electricity, often from nuclear or coal-fired plants. But like the introduction of the gasoline-powered car 100 years ago, the idea of a battery-powered car seems, to some, irresistible.