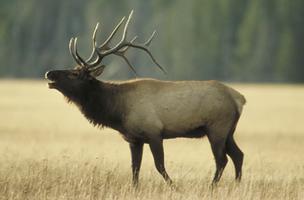 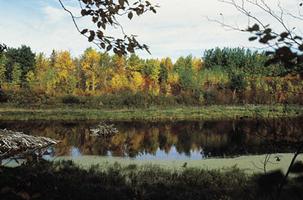 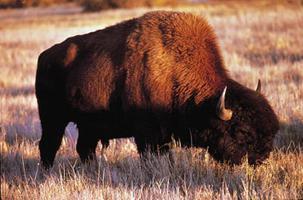 Bison in Elk Island National Park, one of the few refuges for bison in their former parkland and grassland ranges (photo by Cliff Wallis, courtesy Cottonwood Consultants Ltd.).
PreviousNext

Elk Island National Park (established 1913, 194 km2) is a sanctuary of rolling woodlands and meadows dotted with lakes, bogs and ponds, 48 km east of Edmonton. Public interest in the conservation of rapidly dwindling wildlife led to the establishment of a reserve of elk in 1906, which later became Elk Island National Park.

This is the only national park in Canada completely surrounded by a fence. Preserved within the park's fenced boundary is a remnant of Alberta's Beaver Hills. Outside the fence are the outer suburbs of Edmonton, grain fields and pastures. As a result of the fence, intensive resource management techniques have been used to maintain and enhance the parks ecological integrity and biodiversity. Frequent prescribed fires have created a mosaic of aspen and mixed-wood forests, meadows and wetlands, which provide ideal habitat for wildlife, including moose, elk, mule deer, over 600 plains bison and 375 wood bison, various smaller mammals and at least 230 species of birds. Trumpeter swans have been re-introduced to the park. The natural fire regime has been interrupted since the establishment of the park, so due to its small size, all large predators, except for coyote, have disappeared.

Scenic parkways wind through the park and trails lead hikers to lakes and beaver ponds. Meandering through the park offers excellent opportunities for viewing wildlife and most people will not leave the park without at least seeing bison. Semi-serviced camping facilities are available in the park, as are canoeing, golf, cross-country skiing and hiking.