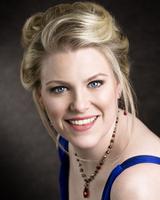 Erin Marie Wall, soprano (born 4 November 1975 in Calgary, AB). Erin Wall is a highly versatile and internationally renowned soprano who has performed an extensive opera and concert repertoire with many of the world’s most prominent opera companies and symphonies. The Guardian praised “the extraordinary ease and sumptuousness of her tone, and a hovering, ecstatic quality in her singing.”

Wall, whose American parents were both musicians, grew up in Vancouver and studied piano as a child at the Vancouver Academy of Music. Although she sang in choirs, she began voice lessons only in high school and was initially interested in jazz. She pursued formal classical voice studies in the United States: first at Western Washington University, where she earned a bachelor of music in 1998; and then at the Shepherd School of Music at Rice University in Houston, Texas, where she studied vocal performance with Kathleen Kaun and received a master’s degree in music in 2000.

Also in 2000, Wall attended the Aspen Music Festival and the Music Academy of the West, where Marilyn Horne and Warren Jones were her teachers. She then made her professional debut in 2001 as a member of the Ryan Opera Center at the Lyric Opera of Chicago. She was the recipient of a Sara Tucker Study Grant (2002) and a Richard Tucker Award (2004) from the Richard Tucker Foundation. In 2003, she earned critical acclaim when she represented Canada in the finals of the BBC Cardiff Singer of the World Competition in Wales.

Wall has sung in the world’s major opera houses: in Italy (La Scala), Austria (Vienna State Opera), France (Opera de Paris), the US (Metropolitan Opera, Chicago Lyric Opera) and elsewhere. Considered a highly versatile soprano, her operatic roles range from Bizet (Micaëla in Carmen) to Wagner (Freia in Das Rheingold) and Stravinsky (Anne Trulove in The Rake’s Progress). She has performed the title role in Carlisle Floyd's Susannah, Musetta in La Bohème and appeared in numerous operas by Mozart, Strauss and Verdi.

Wall made her Canadian debut with the Canadian Opera Company in 2012 as Clémence in Kaija Saariaho’s L’amour de loin. She sang at the Vancouver Opera as Marguerite (Faust) in 2006 and as Violetta (La Traviata) in 2011. She inaugurated the role of Cecilia in The Inventor by Bramwell Tovey.

Although most of her work has been in operatic and symphonic repertoire, Wall collaborated with clarinetist Kimball Sykes and pianist Jon Kimura Parker in Schubert’s The Shepherd on the Rock. In 2013, she appeared with John Hess in recital for Music Toronto’s Discovery Series.

She also participated in the San Francisco Symphony and Michael Tilson-Thomas’ acclaimed Mahler project — a set of 16 discs of the composer’s works released between 2002 and 2009; she contributed to Mahler: Symphony No. 8; Adagio from Symphony No. 10 (2009), which won a Grammy Award for Best Classical Album in 2010. That same year, she was honoured with a Distinguished Alumni Award from Western Washington University’s College of Fine and Performing Arts.