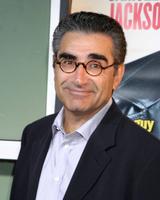 After graduating from Hamilton's Westdale High School, Levy remained in his home town to attend McMaster University, where he studied sociology. It was at university that Levy encountered future collaborators Martin Short and Dave Thomas. As the vice-president of the McMaster Film Board he also became acquainted with future director Ivan Reitman.

After this success on the stage, Levy spent two years performing sketch comedy with Second City Toronto before trying his luck in California with fellow comedians John Candy and Joe Flaherty. In 1976, the three returned to Toronto to work on SCTV, a sketch comedy series that would soon become a full-blown hit in Canada and a cult phenomenon in the United States. Among Levy's most popular characters were news anchor Earl Camembert and comic Bobby Bittman. When the show ended its initial run in 1981, it was picked up by NBC and billed as SCTV Network 90. This new, slicker version of the show ran until 1983 and earned the writing team two Emmy Awards and seven nominations for outstanding writing in a variety or music program (1982, 1983).

Eugene Levy has appeared in numerous comic supporting roles in Hollywood and at home, often alongside SCTV alumni. Some feature-film highlights include National Lampoon's Vacation (1983) with Chevy Chase, Splash (1984) with Tom Hanks and John Candy, and Bringing Down the House (2003) with Steve Martin and Queen Latifah. The role for which Levy is perhaps best known is that of the square, well-meaning father in the very successful American Pie series of teen sex comedies.

In 1985 Levy acted as producer on The Last Polka, an HBO spinoff special focused on two SCTV characters, the Shmenge brothers (played by Levy and Candy). In 1992 he made his feature-film directing debut with Once Upon a Crime, starring James Belushi and John Candy. Levy has also directed programs and specials for longtime friend and collaborator Martin Short, and created the off-the-wall comedy series Maniac Mansion (1990-93) with Joe Flaherty. It was nominated for four Gemini Awards during its relatively short run..

Levy had the recurring role of Gil Bender on the TV series Greg the Bunny (2002) and appeared as Max Yasgur in the film Taking Woodstock (2009). 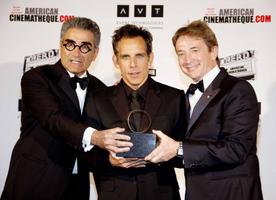 In 1994, Eugene Levy received the Banff TV Festival's Sir Peter Ustinov Award for comedy writing and shared the Earle Grey Award with his SCTV co-stars. He has earned a number of Canadian Comedy Awards and has acted as a member of the advisory committee for Toronto's Humber College comedy program. In 2006 he received a star on Canada's Walk of Fame and in 2008 he was presented with the Governor General's Performing Arts Award for lifetime artistic achievement. In 2010 the Alliance of Canadian Cinema, Television and Radio Artists (ACTRA) gave Levy its Award of Excellence. He was appointed a Member of the Order of Canada in 2011 for "his contributions as a comic actor and writer, and for his dedication to charitable causes."