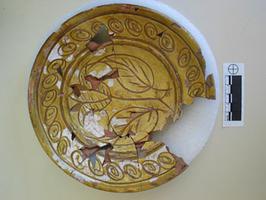 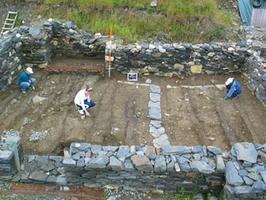 People excavating the floor of the stone house lived in by Calverts and, later, Sir David Kirke and his family (courtesy Colony of Avalon Foundation). 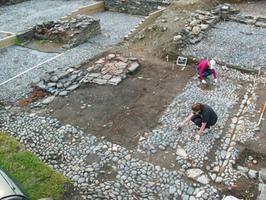 Several structures from the Calvert period at Ferryland, including the first house (with stone fireplace) built in the fall of 1621 (courtesy Colony of Avalon Foundation). 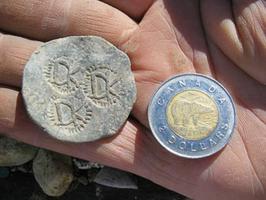 A lead token struck at Ferryland by Sir David Kirke in the 1640s. These\r\ntokens are the first pieces of money made in North America (courtesy Colony of Avalon Foundation). 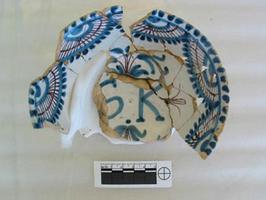 One of a set of tin-glazed tableware with Sara Kirke's initials on the\r\ninside base (courtesy Colony of Avalon Foundation).\r\n 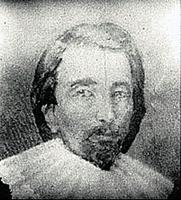 Excavations at Ferryland, Newfoundland, 72 km south of St John's, have revealed a remarkable record of European exploitation and settlement during the first two centuries after John Cabot's visit in 1497.

The lowest levels have revealed campsites of the Beothuk, Newfoundland's now-extinct Native people. At the same levels evidence of European fishermen from Spain, Portugal, the Basque Provinces, Brittany and West Country England have been found. Ceramics, building hardware, and the remains of wharfs, stages and at least one cookroom attest to the importance of this sheltered port during the migratory fishery period of the 16th century.

The first known permanent settlement at Ferryland was founded in 1621 by Captain Edward Wynne on behalf of Sir George Calvert who later became the first Lord Baltimore. At least eleven structures dating from the Calvert period at Ferryland (1621-1638) have been revealed. They include a forge, a bakery/brewhouse, a stone warehouse on the waterfront, Lord Baltimore's stone "mansion house," several other small dwellings and several partly excavated buildings that remain of unknown function as well as defensive works and a stone quayside along the south edge of the harbour. Artifacts from the Calvert period include ceramics from many parts of Western Europe, tobacco pipes, builders' hardware, bottle and drinking glass, lead shot, gunflints and other objects typical of the 1620s.

In 1637 Sir David Kirke was granted the Island of Newfoundland by Charles I in return for the Kirke brothers' capture of French Canada in 1628-29. Kirke evicted Calvert's representative from the mansion house and established himself and his family in what he now called the Pool Plantation, after the inner harbour still known as "The Pool." The Kirkes added warehouses, a barn and several dwellings to the existing infrastructure. Although Sir David was recalled to England during the Parliament of the Commonwealth in 1651, and died there in 1654, his widow, Lady Sara Kirke continued to occupy the Pool Plantation and operated the largest fishing merchant premises on the English shore. She has a legitimate claim to being British North America's first female entrepreneur.

During the Kirkes' tenure at Ferryland, large middens accumulated that contained a remarkable collection of mid- to late 17th-century artifacts. In addition to the usual tobacco pipes, domestic ceramics and builders' hardware, the site has produced coins, gold rings, silver needles and a bodkin, exotic ceramics from as far afield as Burma and included pieces of a set of tin-glazed tableware bearing the initials "SK," clearly the property of Sara Kirke. A minute set of gold seals, bearing the Kirke arms and two other devices were almost certainly the personal property of Sir David himself.

In 1696 the place was destroyed by French forces from Placentia and most of the residents were sent to Appledore in West Country England. The three Kirke brothers, however, were transported to Placentia where they were probably held for ransom. Two died there and the third died in St John's during the same winter.