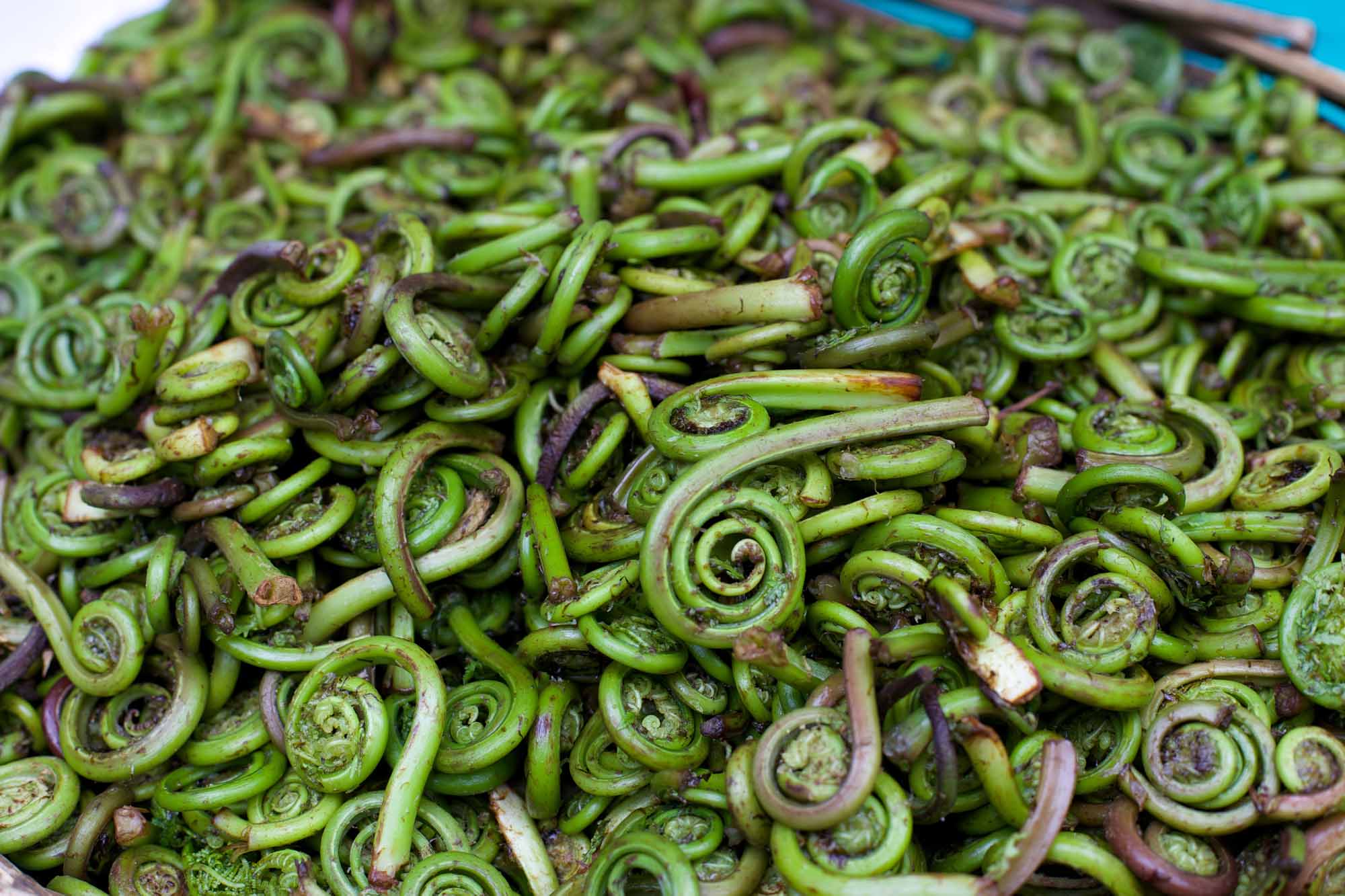 Bunch of Fiddleheads at Farmer's Market. Photo taken on: May 03rd, 2014 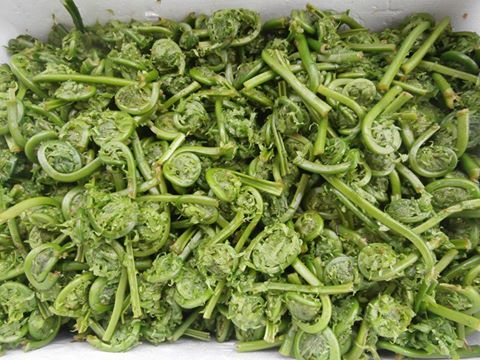 The ostrich fern, also known as fiddlehead fern, is so-named because its large leaves resemble ostrich plumes. In Canada, it occurs in parts of all provinces and territories, most abundantly in New Brunswick, southern Québec and southern Ontario, often in flood plains or near rivers or streams. It also occurs in the United States, Japan, China, Siberia, west to Scandinavia, Belgium, France, and parts of the Alps. This elegant plant grows to a height of about a metre, occasionally 2 metres, in clumps sometimes exceeding a metre in width. The leaves are of 2 types, some large and "ferny" (highly divided), others much smaller and narrower and bearing small spore cases (ferns reproduce by tiny one-celled spores, not seeds).

Fiddlehead are in their coiled form for only about 2 weeks (in May in eastern Canada) before they unfurl. Harvested fiddleheads are about 5 centimetres long and about 2.5 centimetres in diameter. Once the leaves grow beyond 7.5 centimetres they become too bitter to eat. The fiddleheads are gathered from wild stands, although some experimental cultivation is in progress. They have been consumed for centuries in New Brunswick, Maine and Japan. The Maliseet of the Saint John River Valley in New Brunswick have traditionally harvested fiddleheads as a spring tonic and have sold them at local markets. In North America, most commercial harvesting is in New Brunswick and Maine, and the product is frozen, canned and sold fresh. Other fiddlehead-producing areas are Nova Scotia, Quebec, Ontario, Vermont and New Hampshire. Reliable statistics are not available for fiddlehead harvest, sales or consumption for Canada or elsewhere. North American sales are likely in the $7 million to $10 million range.

Fiddleheads have sometimes been eaten raw, but are generally served cooked. The flavour has been compared to a combination of asparagus, green bean and okra. They are a good source of vitamins A and C, niacin and riboflavin, and are nutritionally comparable to asparagus and other common green vegetables. The ostrich fern has been considered to be nontoxic, but a few cases of gastrointestinal illness have been associated with eating raw or lightly cooked fiddlehead ferns. Possibly this was the result of bacterial contamination. As a result it has been recommended that fresh fiddleheads be boiled for 15 minutes or steamed for 20 minutes before consumption (although cook books generally recommend a shorter period, i.e., until tender).