Much of Newfoundland cuisine relies on salt. Fish and brewis (pronounced “bruise”), for example, was developed by fishermen who needed access to ingredients that could last through long fishing voyages, from weeks to months at a time. It is comprised of salt fish, salt pork, and hardtack, a type of hard, dry biscuit popular among sailors. Next to Jiggs dinner, fish and brewis is the quintessential outport (rural) Newfoundland dish.

“Brewis” refers to the preparation of the hardtack. Urban legends have it that “brewis” is a corruption of “bruised,” referring to the process of breaking up the hardtack into bite-sized chunks, but this is unsubstantiated; it is more likely a word of Middle English origin, meaning a broth made of bread, vegetables and meat.

Fish and brewis is served with “scrunchions,” salted fatback pork that has been cut into small chunks and fried.

Purists will eat it as is, but some like to top it up with dashes of pepper or a few spoonfuls of molasses. There are also several variations in preparation. Some add mashed potatoes to the mix. Others like to add onions because they give a more favourable taste to the scrunchions. Fish and brewis is also well complemented with a few cups of boiled peas or steamed vegetables.

This dish may strike modern readers as indulgent, but it was considered a breakfast meal for fisherman and sailors who needed a large, immediate caloric intake to start the day. Healthier alternatives are suggested below. 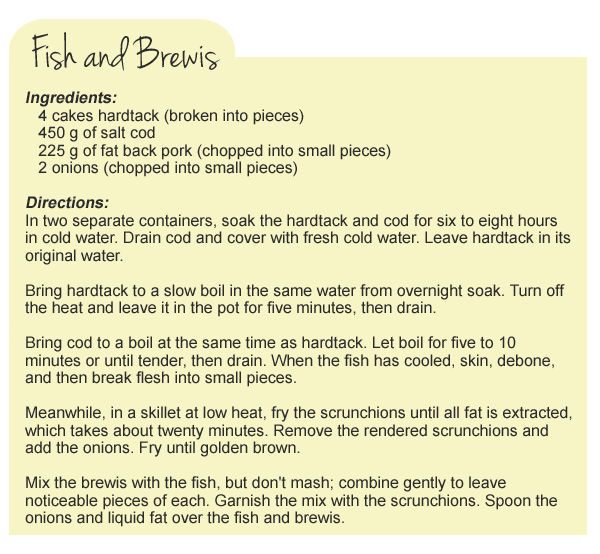 “Fisherman’s brewis” is a spin on fish and brewis. It has similar ingredients but is prepared differently. The fish and bread are chopped while hot and mixed together with the scrunchions. Fresh fish is often used instead of salted.

As an alternative to scrunchions, “drawn butter,” a mixture of melted butter and onions thickened by flour in a saucepan, can also be used. For a healthier choice, sauté onions in a half cup of olive oil with pepper, parsley and two grated cloves of garlic. Diced bacon or pancetta can also be substituted for scrunchions.