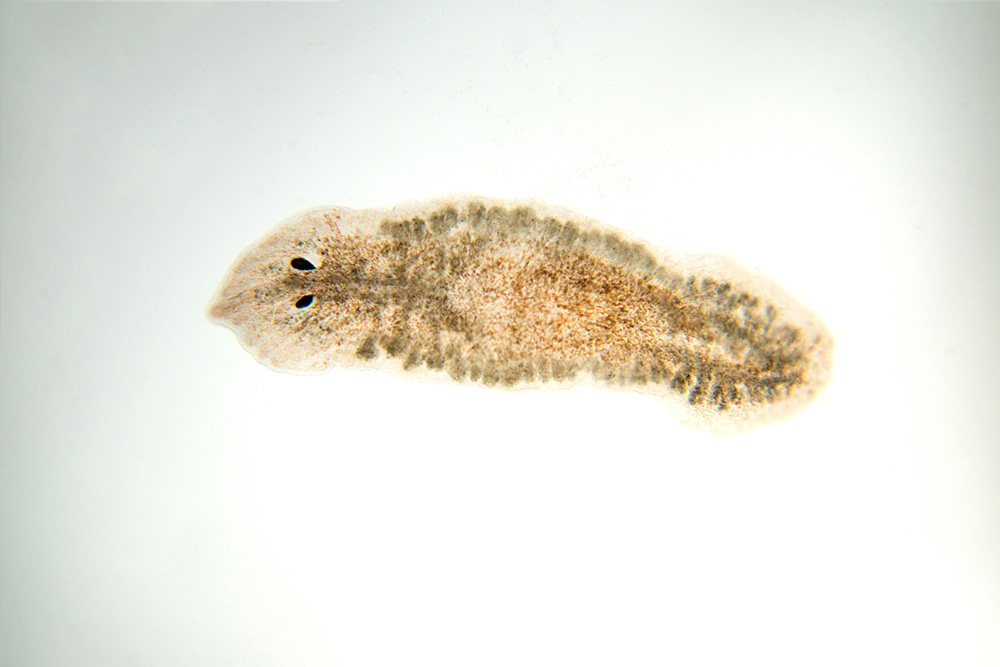 Flatworms have an identifiable "head," sometimes highly modified as an attachment organ in parasitic forms. A body cavity is lacking; internal organs are suspended in a spongy matrix (parenchyma). Flatworms lack circulatory and respiratory systems, but have well-developed reproductive and excretory ones. A simple alimentary tract (gut) occurs in most forms, but is absent in tapeworms and one group of free-living flatworms (Acoela). With few exceptions among the flukes, the gut has only a ventral-surface opening, often close to the front end, serving both as mouth and anus.

Most flatworms are hermaphroditic; however, cross-fertilization between 2 individuals is the rule. Flatworms occur worldwide. Most of the roughly 15 000 known species are parasitic. Probably thousands of species occur in Canada, but only a fraction of them have been discovered. Platyhelminthes are subdivided into 5 classes: Turbellaria, Temnocephalida, Monogenea, Trematoda and Cestoidea. Some zoologists include Temnocephalida in Turbellaria.

Turbellaria are mainly free-living in fresh and coastal waters; some live in tropical, terrestrial habitats, and others are commensals or parasites of aquatic invertebrates or, rarely, fish. They have hairlike cilia on the body, used for gliding over surfaces. Some are brightly coloured; most are whitish, brown, grey, black or colourless, and rather difficult to see.

Temnocephalida have tentacles and a posterior adhesive organ, and lack cilia on the body surface. Almost all live attached to freshwater invertebrates, especially crustaceans, in the tropics and subtropics.

Monogenea are primarily parasitic on body surface and gills of freshwater and marine fishes. The posterior end forms an attachment organ, bearing hooks, suckers or clamps.

Trematoda (flukes) are internal parasites of freshwater, marine and terrestrial vertebrates, some causing disease in humans and animals. Most possess one anterior and one ventral-surface muscular sucker for attachment; body cilia are absent but spines may be present. The most distinctive feature of Trematodes is a complex life cycle, requiring alternate development in 2 or more hosts, one of which is almost always a mollusc.

Cestoidea (tapeworms) are intestinal parasites of vertebrates, also with developmental stages in alternate hosts. They are usually ribbonlike, segmented animals with the anterior end modified into an attachment organ frequently bearing suckers or hooks. Each segment contains one or more sets of female and male reproductive organs. Lacking a gut, tapeworms absorb nutrients through the body surface. Like the flukes, some tapeworms cause disease in humans and animals.

Nemertea (proboscis or ribbon worms) resemble flatworms, but have a tubular, muscular organ (proboscis) that can be turned inside out for capturing food. They differ also in having a circulatory system, an anus and separate sexes. They are mainly free-living, littoral, marine organisms; some live in fresh water or moist terrestrial areas; a few are commensals of invertebrates. Length ranges from under 1 mm to several metres. Often they are brightly coloured. About 500 species are known.