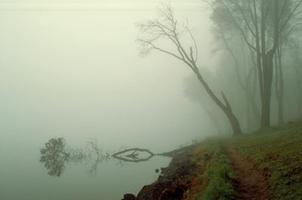 Fog is a concentration of minute water droplets or ice crystals of sufficient density to reduce visibility (Corel Professional Photos).

Fog, concentration of atmospheric particles (usually minute water droplets or ICE crystals) of sufficient density to reduce visibility. For practical purposes, in Canada, a reduction of visibility to 1000-9600 m is arbitrarily called mist; reduction to under 1000 m is called fog. In contrast, haze is a condition where such dry atmospheric particles as dust, ocean salt, natural oils from forest vegetation or forest-fire smoke are present in sufficient quantity to obscure vision. Near or downwind from industrial centres, combustion products such as smoke, soot, sulphuric and nitric oxides can combine with and acidify fog (see ACID RAIN). The major centres in Canada that experience most fog are St. John's, Nfld, with fog reported on an average of 126 days per year; Halifax, NS, with 74; Vancouver, BC, with 62. Penticton, BC, receives least fog, an average of 4 days per year. Argentia, Nfld has the most fog of any place in Canada, averaging 206 days per year.

Radiation fog forms most commonly as moist air is cooled below its dew point, ie, the critical temperature at which air can no longer hold all its water vapour. A dense fog develops if the liquid water droplets or ice crystals formed by condensation are trapped and concentrated in a shallow layer near the ground by a temperature inversion (in which temperature increases with height rather than decreasing with height as is usual). Such special meteorological conditions arise quite frequently. For example, in Canada's coastal regions the cool waters of the Pacific and Atlantic oceans chill warm, moist air masses moving over them, especially in spring and early summer, causing huge banks of persistent fog (called advection fog). Inland fog is commonly caused by the cooling of the lower atmosphere through the radiation of heat into space on cloudless nights. In early morning (particularly in autumn), dense fog banks form and persist until dissipated by the heat of the sun. Weather satellite pictures show that this drying out process proceeds inwards from the outer edges of the fog bank. Warm fronts of weather systems also cause fog when the cool air below the frontal surface becomes saturated by rain falling into it from the warmer air above. This type usually persists until swept away by drier air.

Occasionally, freezing fogs form (mainly of the radiation and frontal types) when liquid water droplets exist at temperatures a little below freezing. Such droplets are said to be supercooled and freeze into beautiful fringes of hoar frost on wires, trees and other objects. In the depths of Canada's arctic winters, the air is so bitterly cold that it can hold very little water vapour. When cooled further, what little vapour there is condenses into a fog of tiny, sparkling ice crystals rather than liquid droplets. Any extra moisture placed into the atmosphere (eg, by vehicle exhaust) also expands into an immediate ice-crystal fog. Arctic sea smoke, another type of winter fog, is formed when air, made warm and moist by contact with open water, rises through convection and condensation takes place immediately.