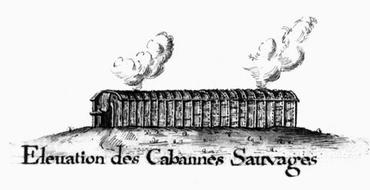 Drawing of a longhouse near Fort Frontenac (Kingston, Ont) circa 1720. Detail from a map of Fort Frontenac, Edward E. Ayer Collection, The Newberry Library, Chicago. From a photograph held by the Library and Archives Canada.

Fort Frontenac was located at the mouth of the Cataraqui River, at the site of present-day KINGSTON, Ont. Construction began during negotations between Governor FRONTENAC and a delegation of IROQUOIS in July 1673. Ostensibly the fort, initially known as Fort Cataraqui, was meant to provide protection for VILLE-MARIE [Montréal], but it was intended as much to further fur-trading interests in the Great Lakes and Ohio Valley areas. By 1688, relations with the Iroquois had soured and in that year a force of Iroquois warriors laid siege to the fort. Ninety-three French soldiers died of SCURVY during the long siege. After the LACHINE RAID the following year also by the Iroquois, Governor DENONVILLE ordered the fort abandoned. The garrison razed it and returned to Québec.

Frontenac reoccupied the site, rebuilding the fort in 1695, and the post became known as Fort Frontenac. Reinforced by troops under François-Charles de Bourlamaque and later the Marquis de MONTCALM, it nevertheless fell to the British under John Bradstreet in August 1758. The site remained neglected until 1783, when the British re-established Kingston as a major military and naval base. When they built the more substantial fortifications, FORT HENRY, overlooking the river and harbour, the fortifications of Frontenac were abandoned and eventually buried as the city developed.

In 1982, an archaeological dig uncovered part of the original fortifications in downtown Kingston. Part of the walls were exposed and stabilized.