Charlie Lake Cave, 7 km north of Fort St John, is recognized as one of the oldest archaeological sites in Canada, revealing evidence of human habitation 10 500 years ago. In 1793 Alexander MACKENZIE reached a point on the PEACE RIVER south of here. A series of forts were established during the fur-trading era. The first, built by the NORTH WEST COMPANY and named Rocky Mountain Fort in 1794, was replaced with Fort d'Epinette in 1806 near the mouth of the Beatton River (renamed Fort St John by the Hudson's Bay Company [HBC] in 1821). The HBC fort was later relocated 3 more times near the site of the present-day city; the last one at Fish Creek (1925-75). Towards the end of World War I and into the 1920s, settlers moved westward to the fertile agricultural lands on both sides of the Peace River. The population increased greatly after completion in 1942 of the Alcan Military Road, now known as the ALASKA HIGHWAY. The discovery of oil and natural gas south of the city in 1951 attracted more people. 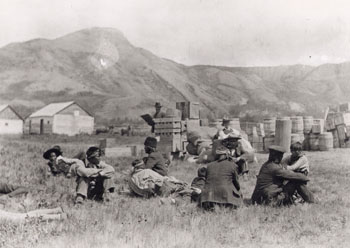 Traders waiting at the Hudson Bay fort of Fort St John at the turn of the 20th century (courtesy Provincial Archives of Manitoba/N12892).

Fort St John has since become the largest centre in British Columbia north of Prince George, with a trading area population of 60 000. Agriculture, forestry and the natural gas industry are the basis of the expanding local and regional economy. The Peace River region produces nearly all of the province's grain crops and CANOLA. As well, as the energy capital of British Columbia, Fort St John promotes itself as "The Energetic City." The city's facilities include a campus of Northern Lights Community College and the North Peace Cultural Centre.

The district municipality of Taylor, 16 km south of the city, is the site of natural gas processing plants, sawmills and a pulp mill providing additional employment for Fort St John residents.