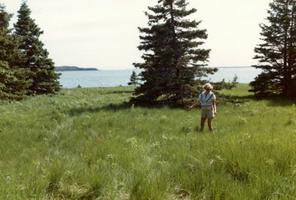 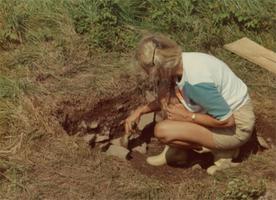 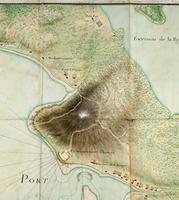 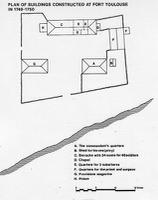 The village of Port Toulouse and its fort are situated in St. Peter's, Cape Breton, Nova Scotia. The site is on the Atlantic coast, east of St. Peter's Canal, which links the Atlantic with Lake Bras d'Or. The French established a trading post here around 1630 on a Mi'kmaq portage route, now the canal. The post burnt to the ground in 1669.

The village and Fort Toulouse were established after the 1713 Treaty of Utrecht when France transferred its interest to Cape Breton Island from mainland Nova Scotia. The site guarded the portage between Lake Bras d'Or and the interior of Cape Breton, and strengthened the alliance with the Mi'kmaq for whom this area was central. Construction of the fort began in 1715. During the years 1731-1734 ambitious plans were made for extensive renovations of the fort, but it is unknown how much was done. The fort was destroyed on 29 April 1745 by a large British detachment. After Cape Breton Island was returned to the French in 1748, a simple palisaded fort was built.

Settlement of the village began in the fall of 1715. Over the years its population fluctuated from a maximum of 261 to a mere 76. The village was destroyed by the British in April of 1745, but was rebuilt four years later. After the fall of Louisbourg in 1758, the fort was burnt and the village came under British control. It was renamed St. Peter's and resettled by veterans from the Seven Year's War. By 1777, the son of an Irish immigrant, Lawrence Kavanagh, Jr., moved there, soon becoming the leading merchant of Cape Breton. Kavanagh built a substantial residence on the site in 1811-15. It was demolished in 1911 and replaced with Richmond County Hospital. The latter was destroyed by fire in 1920.

The first archaeological survey of the fort was done in 1973 by Donald B. Webster of the Royal Ontario Museum. Webster was searching for the Portuguese/Azorean settlement of Alvares Fagundes from about 1523, as well as 17th and 18th-century French, Basque and English settlements. He speculated that structural remains in the village area may be part of the French fort earthworks but did no testing.

Limited excavations took place in 1985 by Birgitta Wallace for Parks Canada to identify the precise location of the fort. Aerial photos indicated the location of the fort in an otherwise densely wooded area of mostly coniferous growth, including portions of what may have been the western wall, two cellar pits, a mounded feature and a well.

Excavations in the most distinct pit revealed the partial cellar of a wattle-and-daub house with a foundation of field stones. The building had been destroyed by fire. Domestic artifacts indicate that the building had been a residence, probably the commandant's house built in 1749-50. Household ceramics include shards of Saintonge of early to mid-18th century variety and Beauvais-style hollowware. Among the more personal objects were a coin from 1711, gunflints, pipe fragments, brass buttons and part of a uniform braid, as well as food debris. Eighteenth-century artifacts are continuously eroding out of the beach bank below the fort. On the basis of measurements made at Louisbourg, the sea level here has risen about 1 m since the mid-18th century. About 15 m of the shore has been lost since 1750, and the entire site is now heavily water-logged.

In 1793-94 the English Fort Dorchester, or Fort Granville, was erected on top of Mount Granville, about 0.5 km north of Fort Toulouse. It was soon abandoned and reportedly in ruins already by 1798. The ruins are still highly visible.

The Village of Port Toulouse

A detailed map of Port Toulouse from 1731 shows a village comprised of about 15 buildings and garden plots in a line along the shore, as well as the priest's house and a cemetery. There are small clusters of buildings west of what is now St. Peter's Canal, among them a "briquerie." No excavation has taken place in the village area and its overgrown state obscures potential traces of buildings, but building remains are visible in the more open area as well as some of the foundations of the 1911 hospital. In the cemetery area, a skeleton was encountered during the digging of a drain in the back yard of a house erected in the 1950s, and gravestones were still in place in the early 1900s.