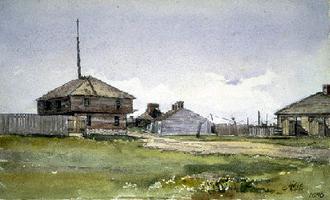 Fort York was sacked twice by the Americans during the War of 1812 (courtesy Library and Archives Canada/C-40091).

Beginning in 1793, a stone gunpowder storage building, wooden barracks, log blockhouses and earthen gun batteries were built to protect the harbour from enemy vessels in time of war.

At the beginning of the War of 1812, the defences at York (Toronto) were not very formidable and were lightly garrisoned by the British Army even though a strategically important shipbuilding yard had been established in Toronto Harbour. It was felt that York was too isolated and too well protected by the British Lake Ontario fleet to be attacked by the Americans.

However, by the early spring of 1813, the American navy had gained ascendancy on Lake Ontario and were able to sail the lake without fear of being overwhelmed by the British fleet. On 27 April, they launched an amphibious invasion from Sackets Harbor, New York, aimed at capturing British ships and naval stores at York. More than 1700 Americans under the command of Brigadier-General Zebulon Pike overwhelmed the British garrison of 300 British regulars, 500 militia and 50 Aboriginal allies under Major-General Roger Hale Sheaffe in the Battle of York (see The Sacking of York).

As the Americans advanced towards the main British battery, Sheaffe ordered his regulars to retreat, exploding the main powder storage building and burning naval stores and a new ship under construction as they departed. The blast killed many Americans, including General Pike. When Sheaffe's army retreated, the town of York surrendered to the Americans. The Americans occupied the town until 8 May when they finally set sail. They burned government buildings, including the Parliament buildings, before leaving. In July, an American squadron returned and burned any government buildings that had been left standing in May.

When the British reoccupied York, they began building a new fortification on the ruins of the earlier installation. The defences and gun batteries were powerful enough by August 1814 to prevent an American flotilla from entering the harbour.

During the Upper Canada rebellion (see Rebellions of 1837), Fort York served as a rallying spot for local militia. While the rebellion did not amount to much, it did spur the British to undertake additional construction in Toronto. In the early 1840s, the New Fort (later called Stanley Barracks) was built one kilometre to the west and a small British garrison was maintained there until 1869 when the new Dominion of Canada took over its own defence. The Canadian militia continued to use both forts into the 20th century.

Development threatened the Old Fort at the turn of the 20th century and this prompted a public outcry over the possible loss of a Toronto heritage icon. As a result, the Department of Militia and Defence transferred the property to the City of Toronto in 1909 with the provision that the city would preserve the Fort's historic structures. The city undertook restoration work during the Great Depression and opened "Old Fort York" to the public in 1934, in conjunction with the city's centennial. Renamed as Historic Fort York in the 1970s, this national historic site features several original buildings, four of which were constructed during the War of 1812.

In the fall of 2014, a Visitor Centre opened on the Fort’s grounds. The centre serves as the entrance to the site, and is situated along what was once Lake Ontario’s shoreline. The 2,400 square-metre facility includes exhibit, research and community space, and was designed by Vancouver-based Patkau Architects alongside Toronto-based Kearns Mancini Architects. The total cost of the Centre (including the installation of exhibits) was about $25 million.